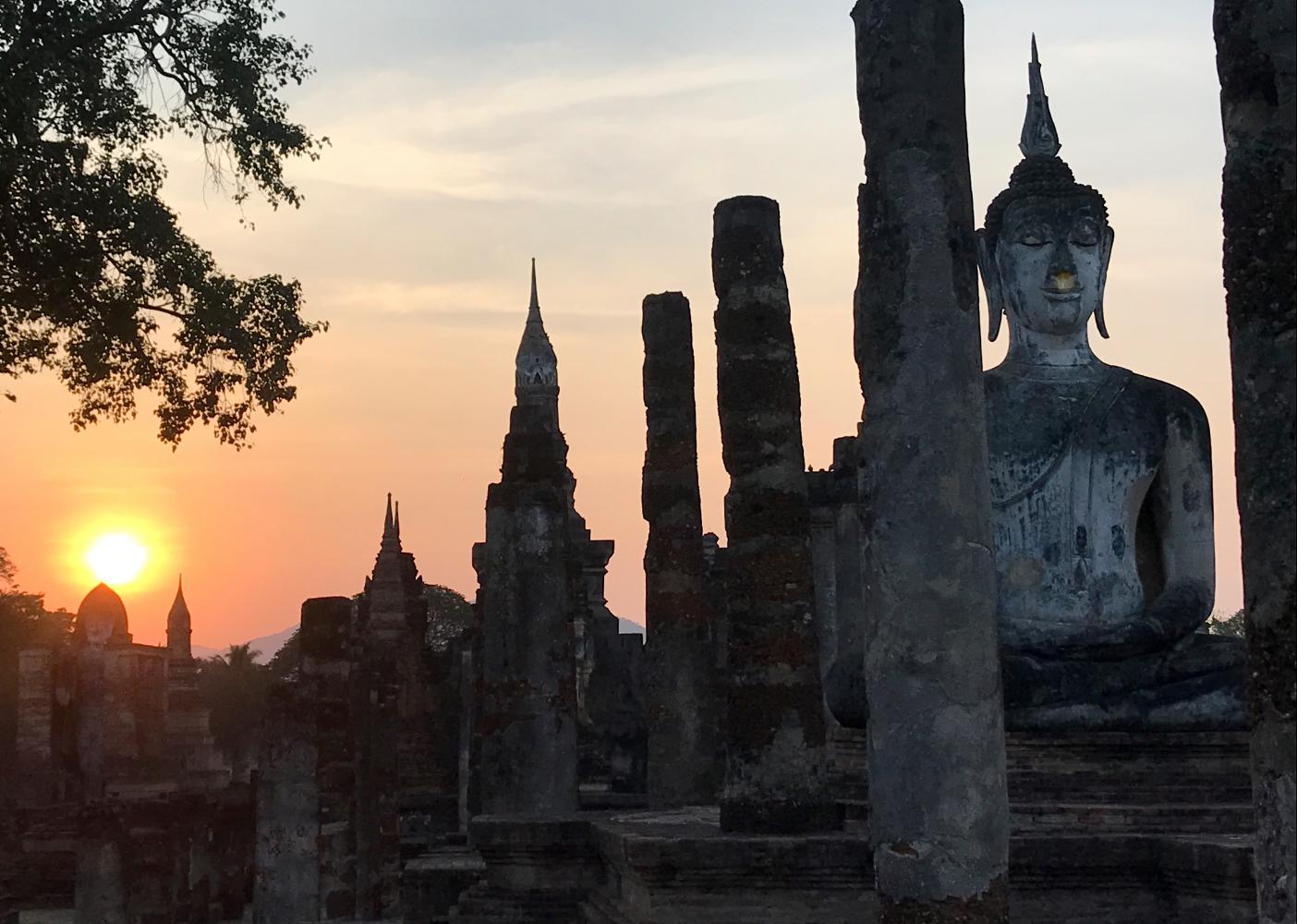 Posted on February 19, 2020 at February 28, 2020 by Travelelog 173 0
The sunset at Wat Mahathat, the largest temple compound in Sukhothai Historical Park.

Thai classical music was heard from afar. The pleasant melody was like a welcome message to visitors wandering in the Sukhothai Historical Park in Sukhothai province. 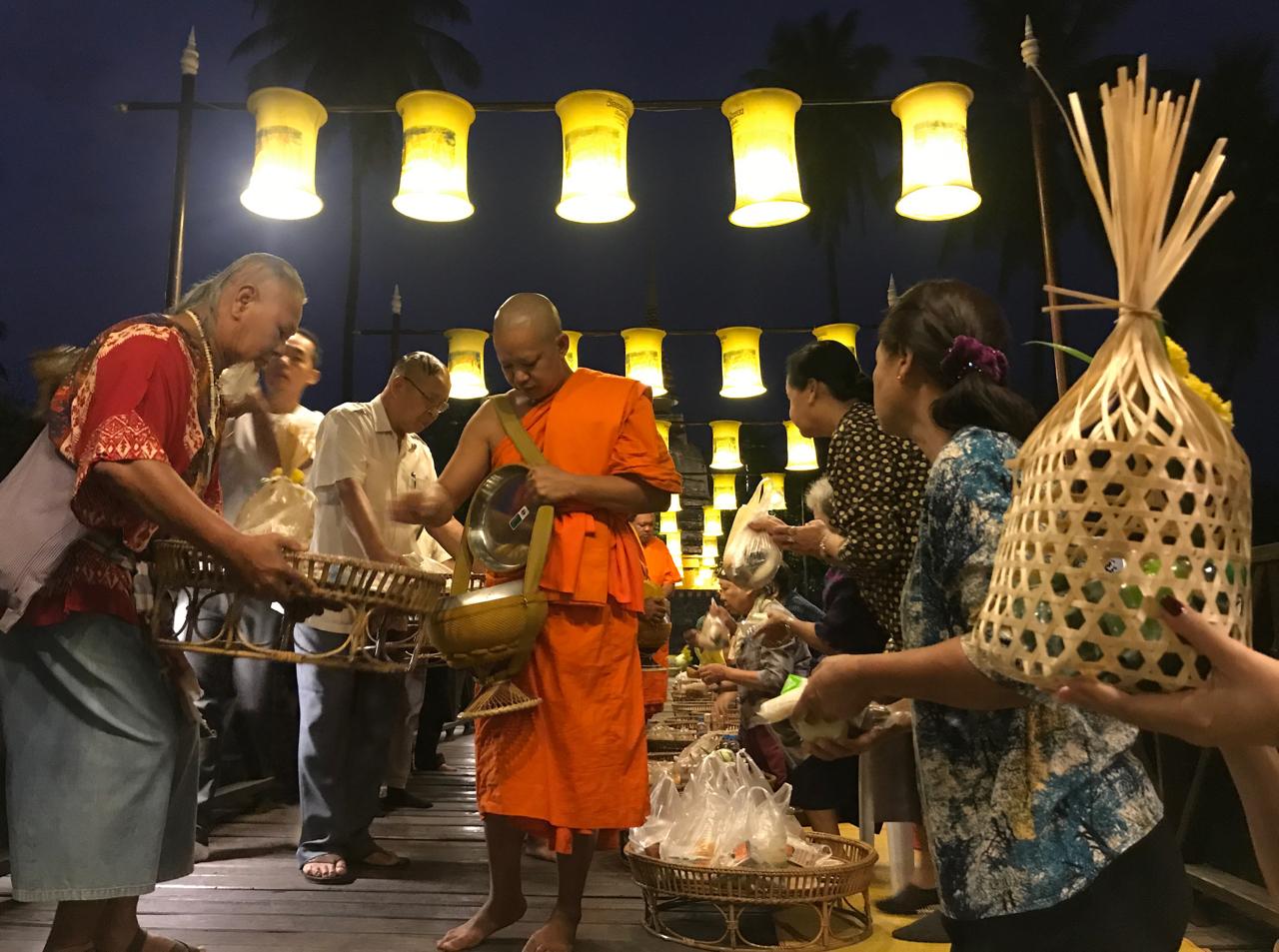 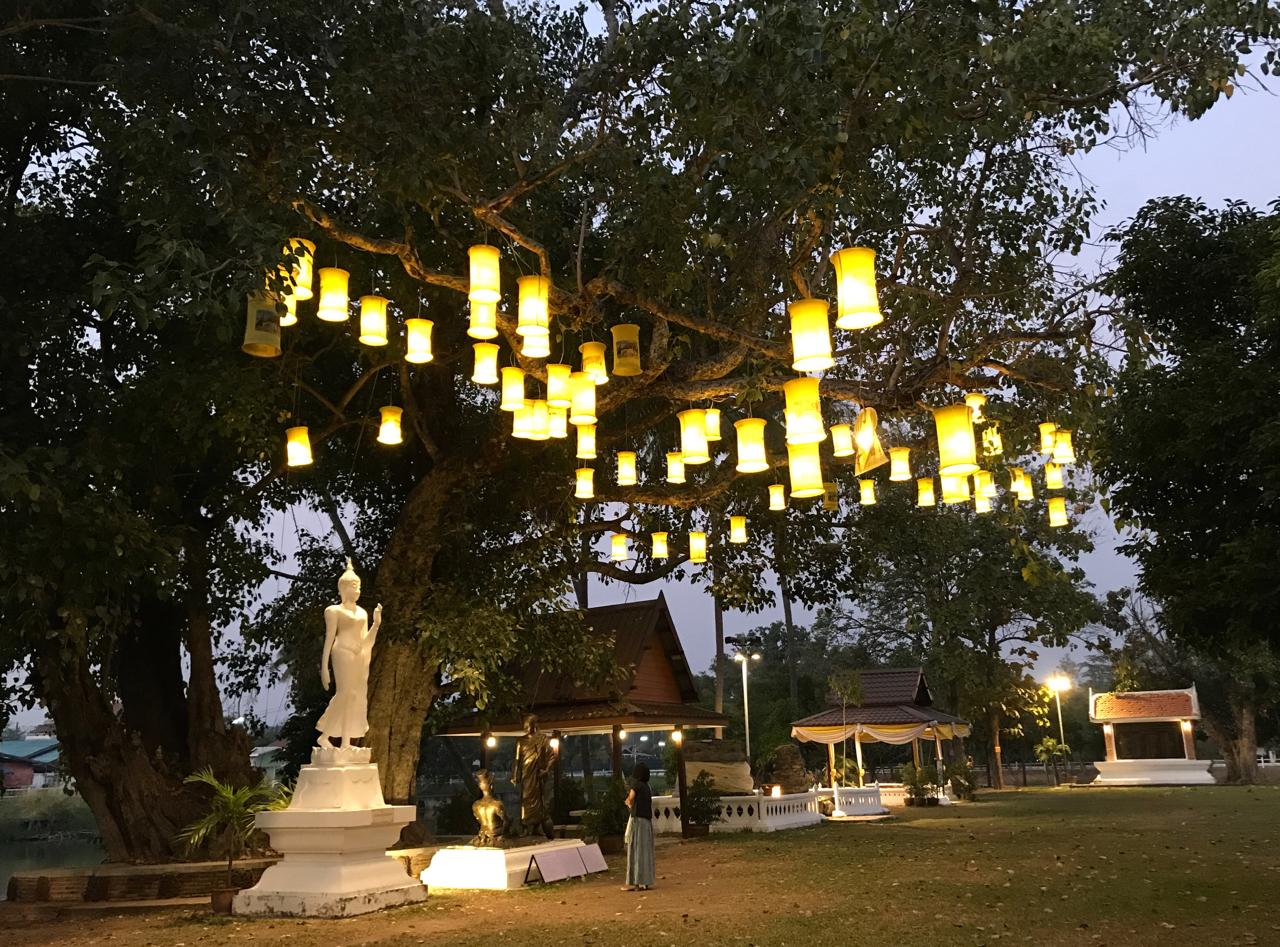 At Wat Taphang Thong in Si Satchanalai district, visitors can join locals to offer alms to monks on a wooden bridge. The ritual starts around 6.20am daily. Karnjana Karnjanatawe

It was late afternoon. The weather was pleasant and the Sun was about to set. My friends and I slowly walked toward the direction of the music. Lining both sides of the walkway were kiosks of arts and crafts. Some vendors had a workshop for visitors to try painting a fish on a plate or creating a keychain by using colourful woven threads.

Ahead of us was the ruins of Wat Mahathat where the band was performing the traditional songs on a temporary stage. The music was a signal that a ceremony was about to begin. The event recently hosted by the Designated Areas for Sustainable Tourism Administration (Dasta) aimed to celebrate Sukhothai as a Creative City of Crafts and Folk Art by the United Nations Educational, Scientific and Cultural Organization (Unesco).

"I am glad that Sukhothai received the honour," said Baisri Sridumdej, 63, a member of the Tai Khrang ethnic group in Ban Koh Noi in Si Satchanalai district. She had a booth at the fair to exhibit the traditions of Tai Khrang and also had vivid wool threads for visitors to create their own earrings. She handed me a brochure of her village and said that the creative city status would help further promote the province and may bring more visitors to her village.

Situated in the lower part of the northern region, Sukhothai was the first Kingdom of Siam in the 13th and 14th centuries. The province is home to the historic towns of Sukhothai and Si Satchanalai, which were listed together with Kamphaeng Phet Historical Park as Unesco World Heritage sites.

"However, Sukhothai is not yet regarded as one of the most popular tourist destinations. Most visitors who travel to the province are those who love history," said Dasta director-general Taweebhong Wichaidit.

"In fact, the way of life of locals is also related to historical sites such as Sangkhalok ceramic wares that were produced in the old Kingdom of Sukhothai dating back more than 700 years. The art is still made by locals today," he said.

The goal of the creative city is to encourage people, especially the younger generation, to learn to create new products or services based on what they have and add more value to their treasures.

Sukhothai is known for its many outstanding handicraft works. Among them are gold and silver carved ornaments, ceramics and pha tin jok, which is colourful hand-woven fabrics with intricate traditional patterns. The challenge is that it is hard to pick only one to be the highlight of the province, Taweebhong said.

Sukhothai can learn from the success of other creative cities like Phuket, which was listed in the Unesco Creative City Network as the creative city of gastronomy in 2015.

"Sukhothai needs to highlight one of its folk arts as its identity so that every policy and action plan will go forward in the same direction," said mayor Somjai Sowasupana of Phuket City, who joined the event.

"Since we started promoting local food, especially in the old town of Phuket, we see more shophouses, which had been closed, are now renovated and open. Young people come back home to run coffee shops, boutique hotels and restaurants. Life returns to the old town. Today Phuket is known not only for sun, sand and sea but also a destination for delicious cuisine. Thanks to the creative city status," she said.

For Sukhothai, part of the plan that was submitted to Unesco is to have an arts and crafts centre to showcase local wisdom. In future, an R&D centre for arts and crafts must be established to help locals improve their products or introduce new services. Schools will offer courses that teach students about Sukhothai handicrafts so that the skills will be passed on to the younger generation.

"The award makes us proud of our heritage and encourages young minds to preserve our treasures and learn to add value into them," said Raveewan Khanadnid, a descendant of Tai Phuan ethnic group and managing partner of Suntree weaving textile shop.

When people love their city, they will not look for work in other provinces, she said. They will keep on improving on what they have. "Being known as a creative city will help bring sustainability to our community in the future," she added. 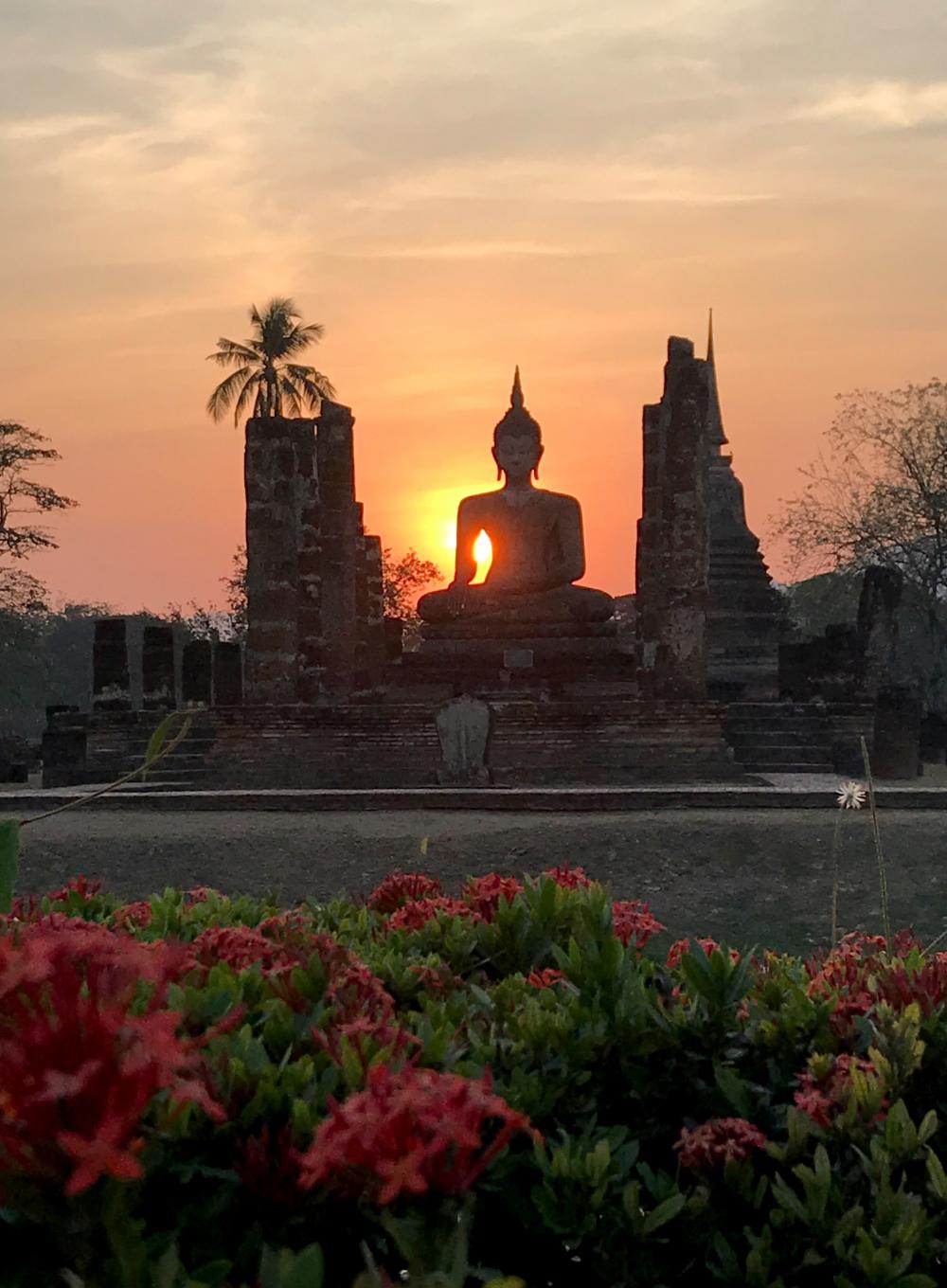 The sunset at Wat Mahathat, the largest temple compound in Sukhothai Historical Park. 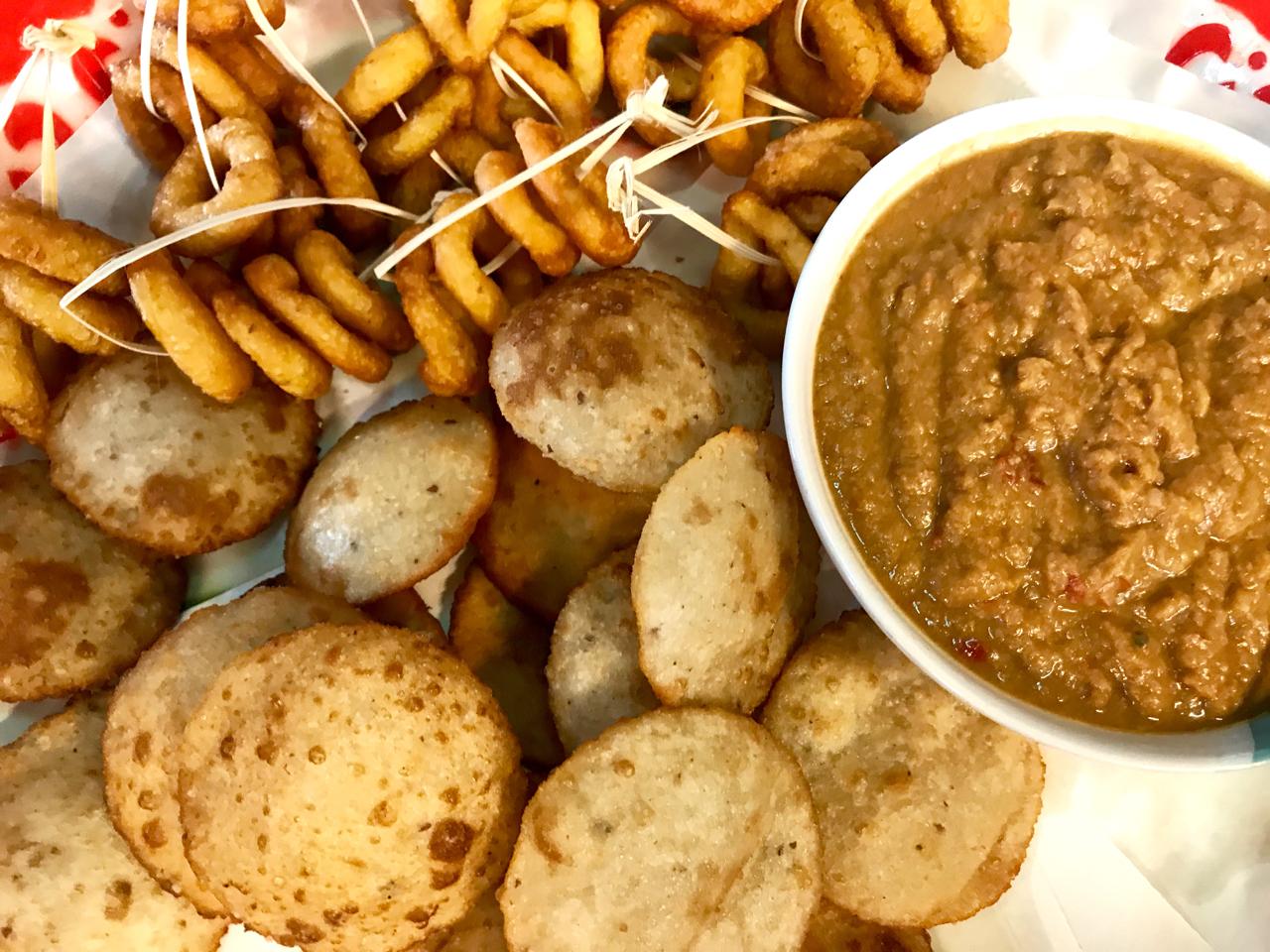 The round fried dough is called khao tho-the. It is made of fermented rice and served with fish curry. The taste is like eating khanom chin namya pla (fermented rice noodle topped with fish curry). Another meal is called khao khong. It is a snack that is made of sticky rice mixed with sweet potato, coconut shreds and coconut sugar. They both taste good. Karnjana Karnjanatawe 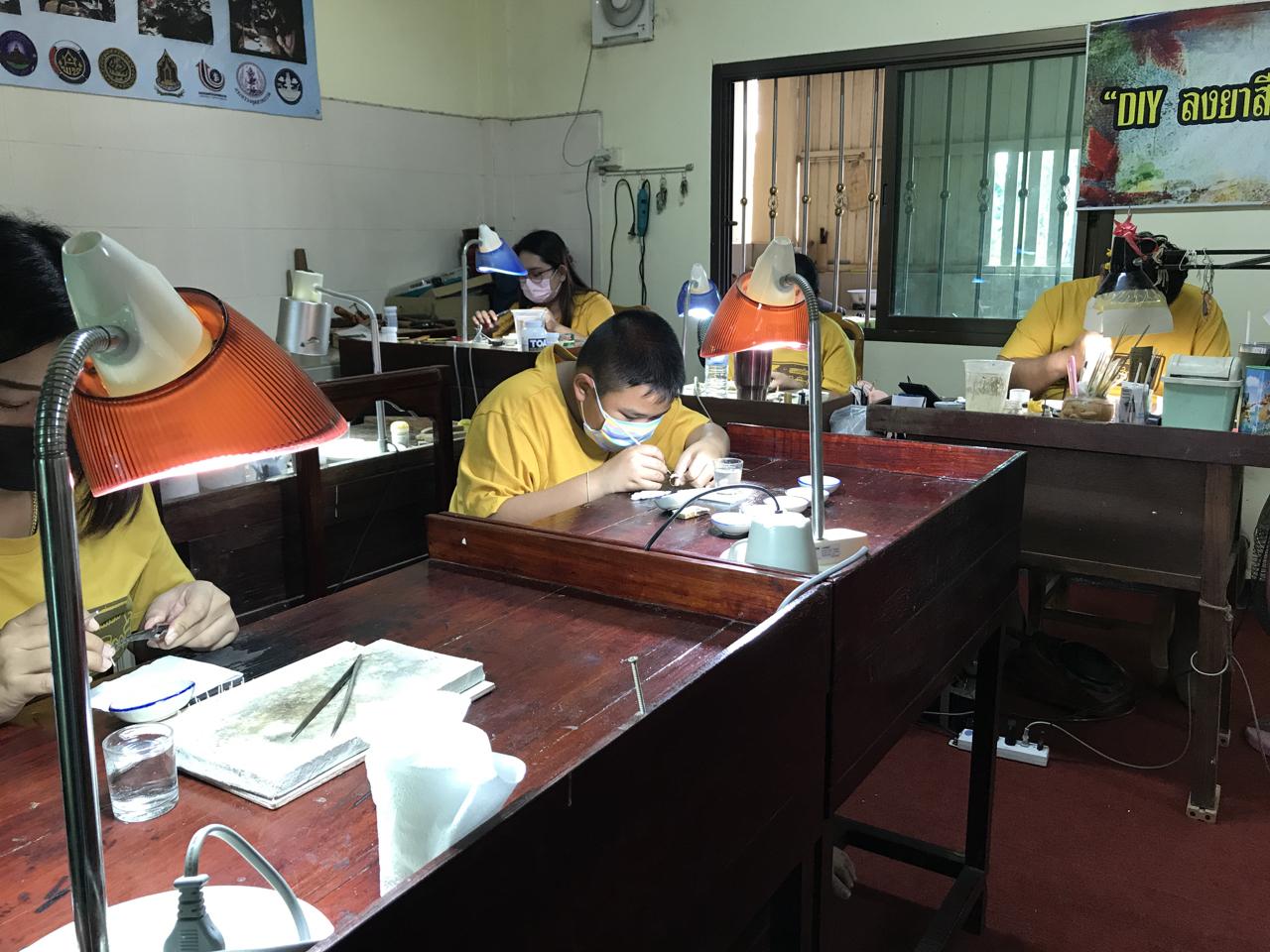 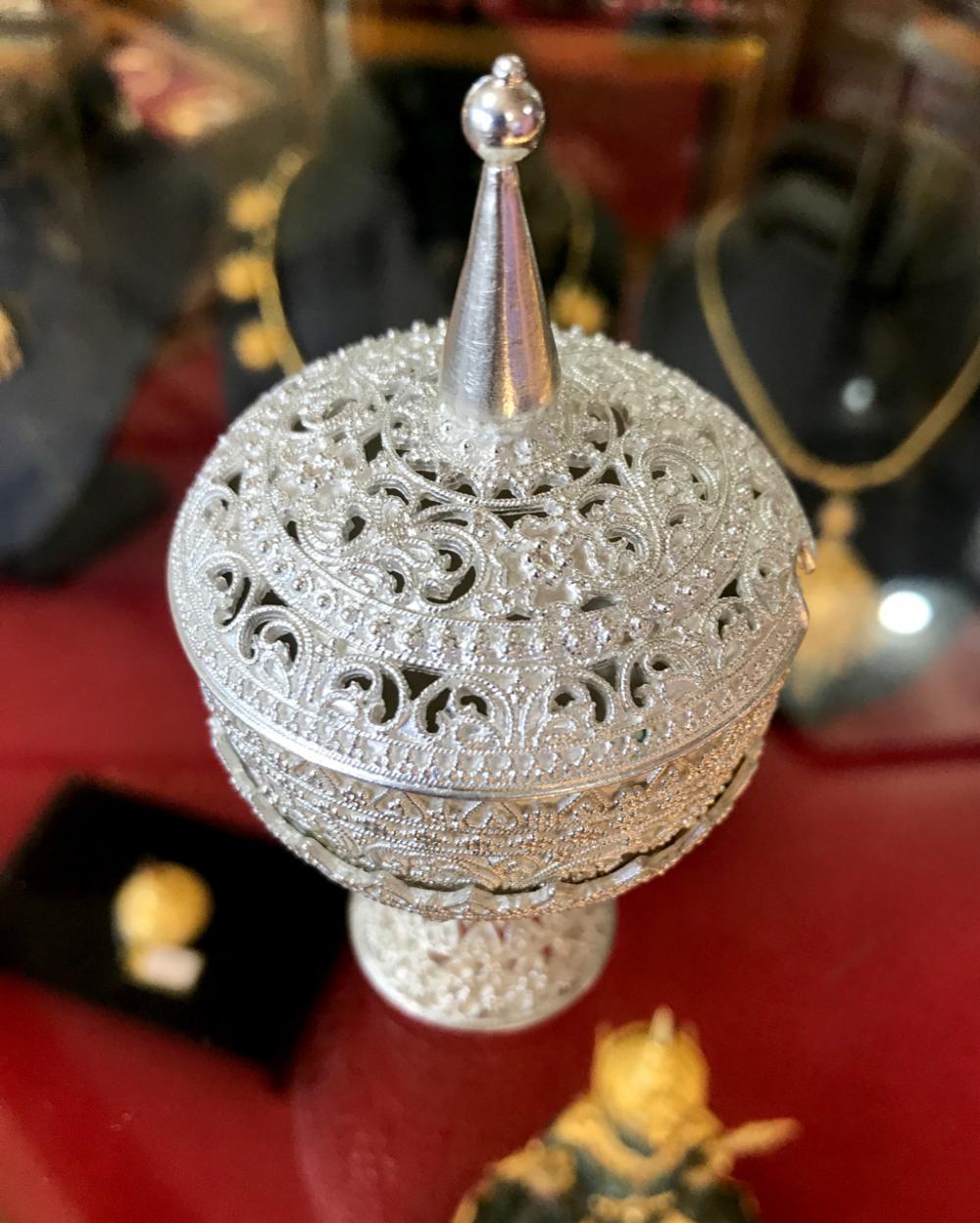 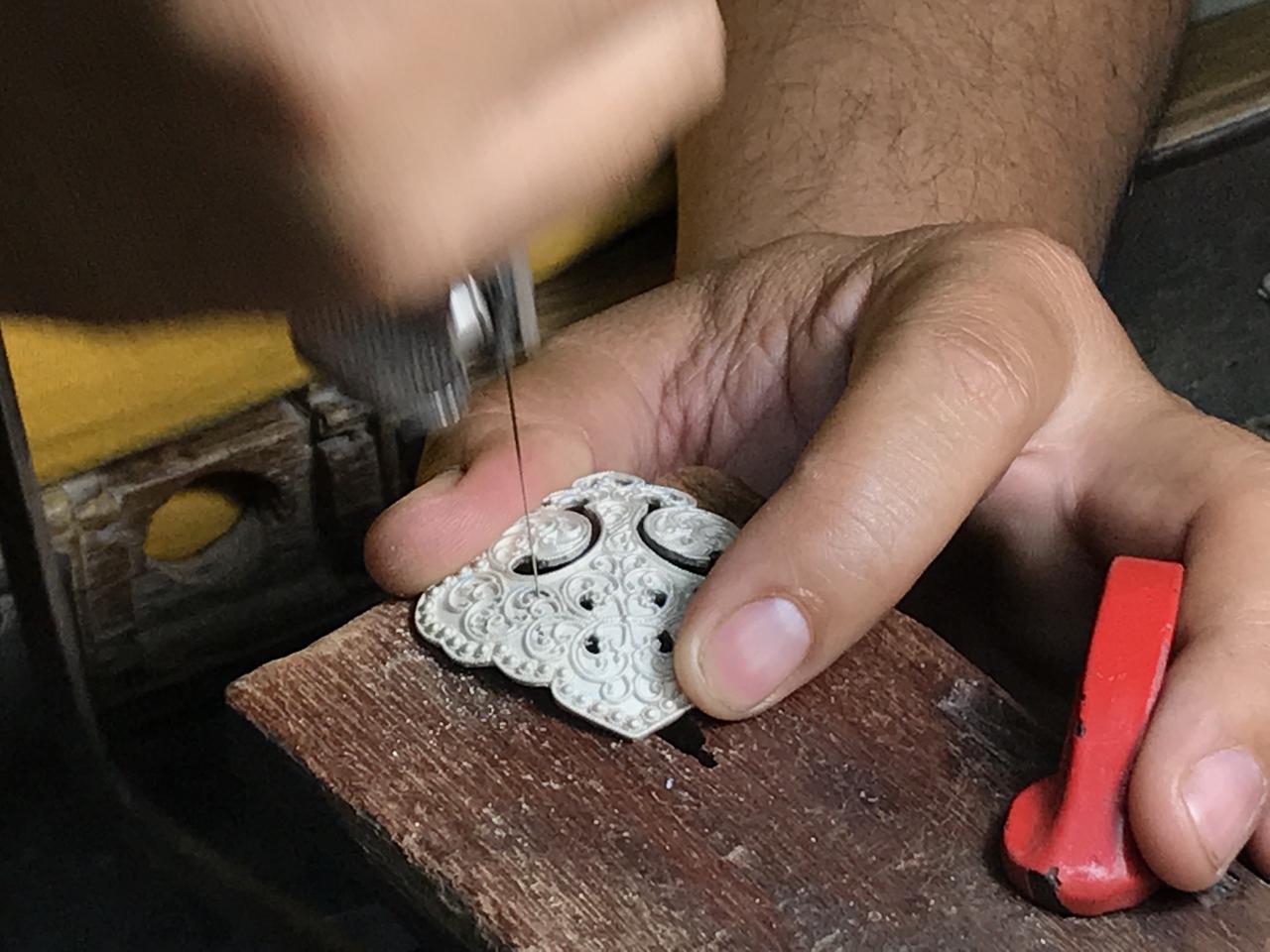 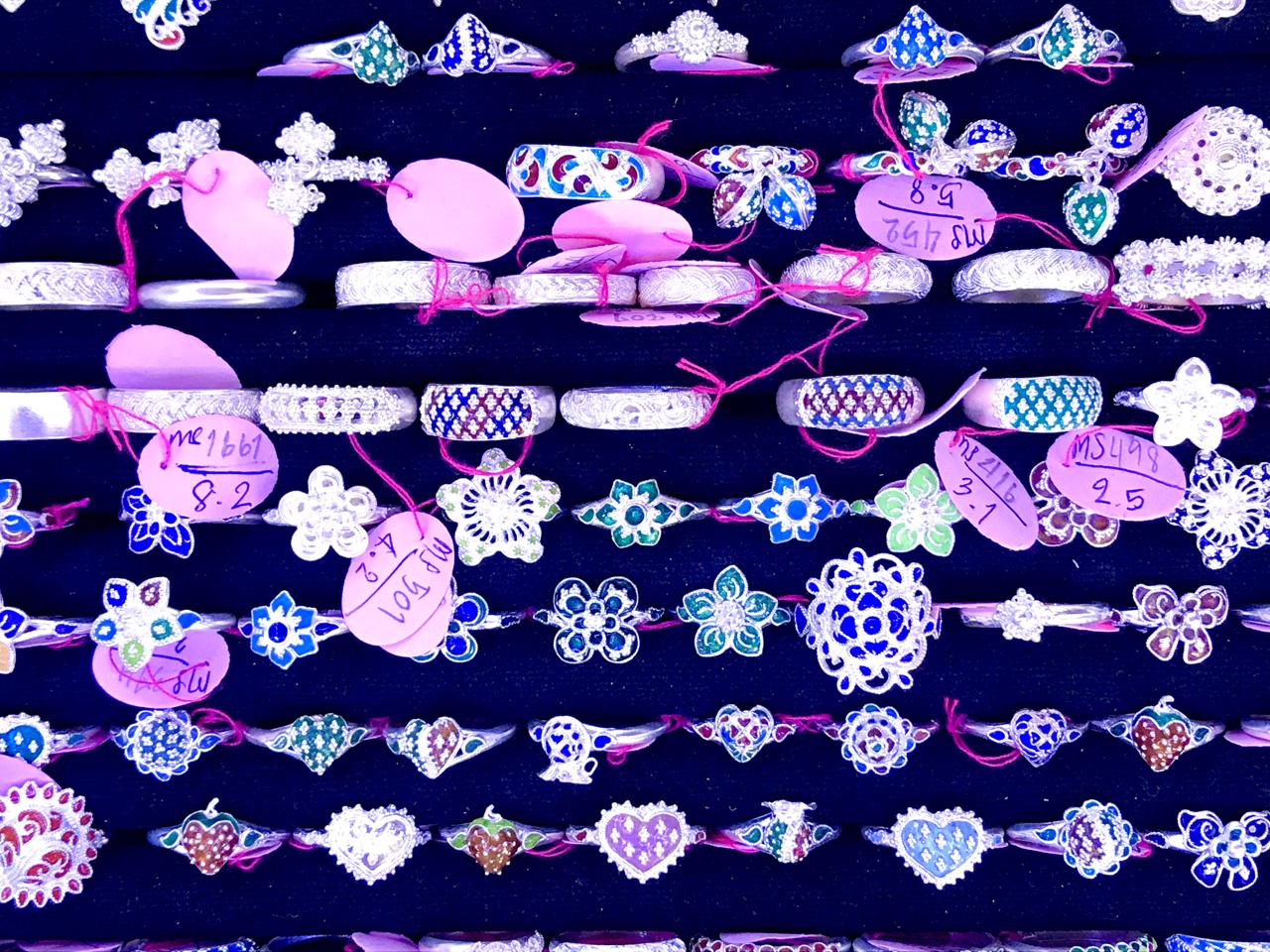 Mai Ngoen Mai Thong silver shop in Si Satchanalai has been open since 2001. It offers both silver and gold ornaments beautifully made in the Sukhothai style, a delicate handmade technique. About three years ago, shop owner Pitsamai Phuiphrom, who was chairwoman of Thai Chai Tourism Club, launched a workshop for tourists to paint colours on either a ring or a pair of earrings. The enamel process is known as long ya. The aim is to give a glimpse of the experiences of a Sukhothai craftsman. After we selected the rings we liked, we moved to its working area and paired with professionals. In front of me were four small bowls and a paintbrush. Each bowl had one vivid colour inside like blue, green, yellow or red. After finishing colouring, we handed the rings to a staff member. She used a soldering torch to fire each ring and make the colour permanently stick. The cost of the workshop was 300 baht including a snack box. 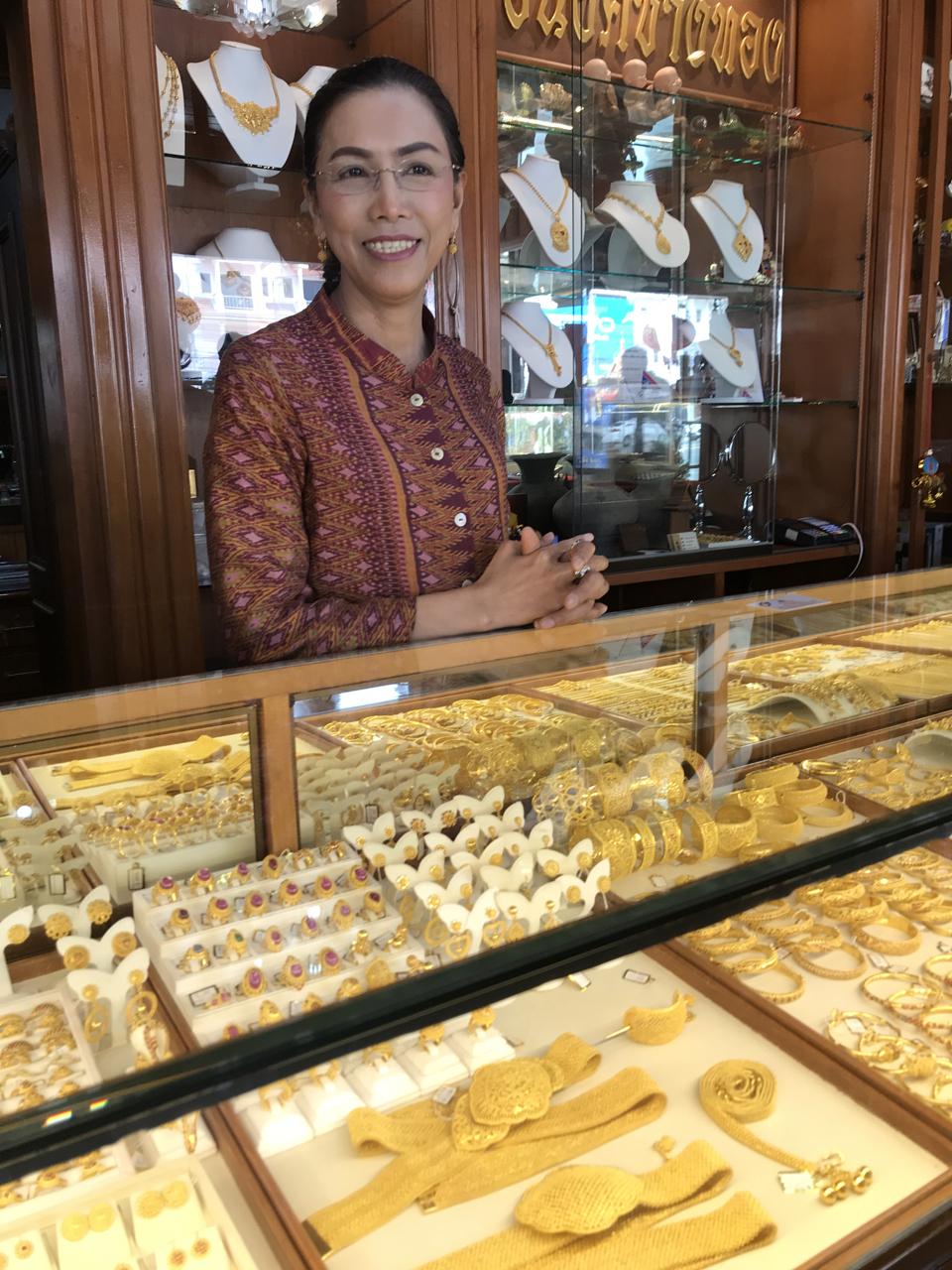 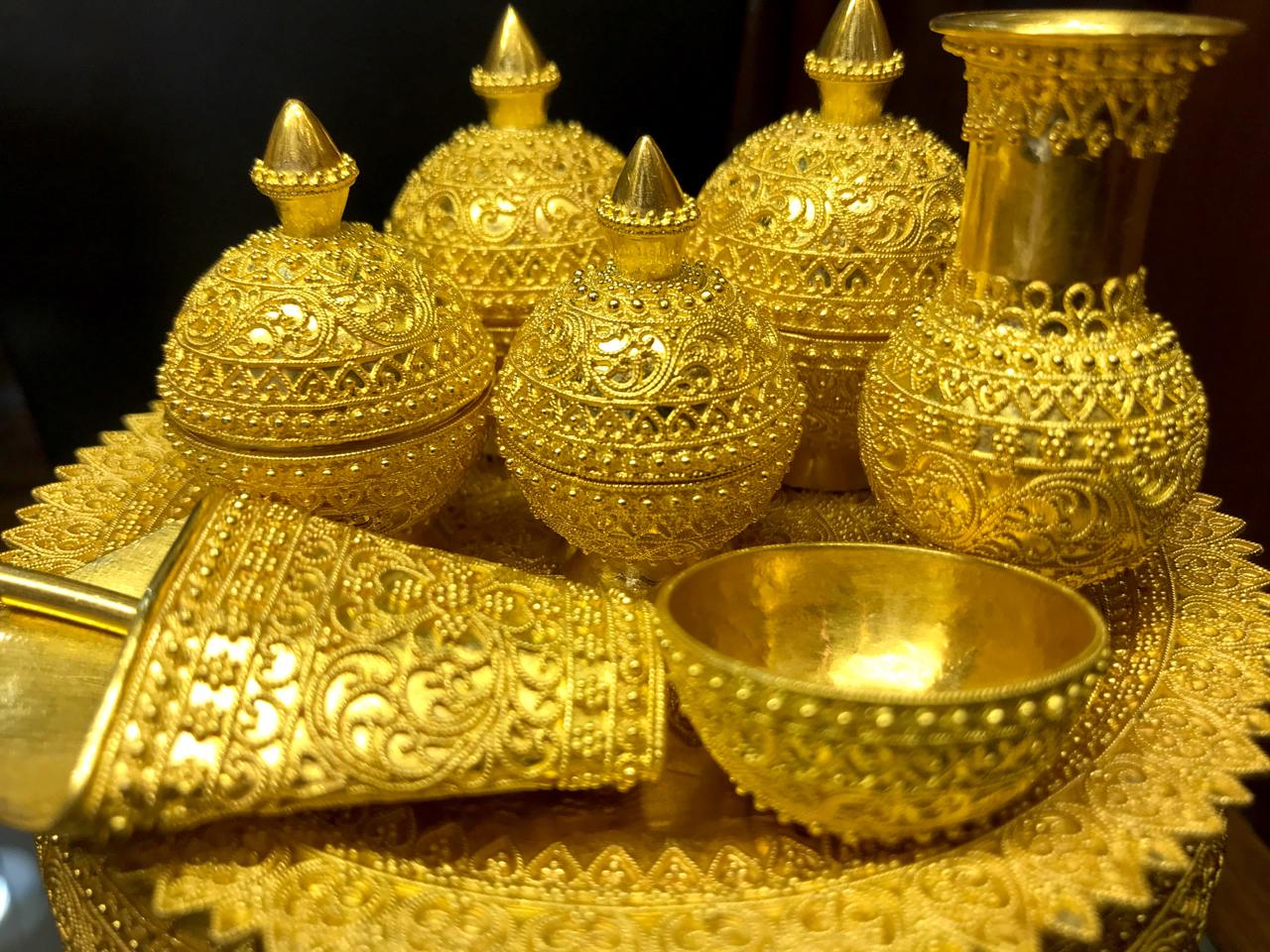 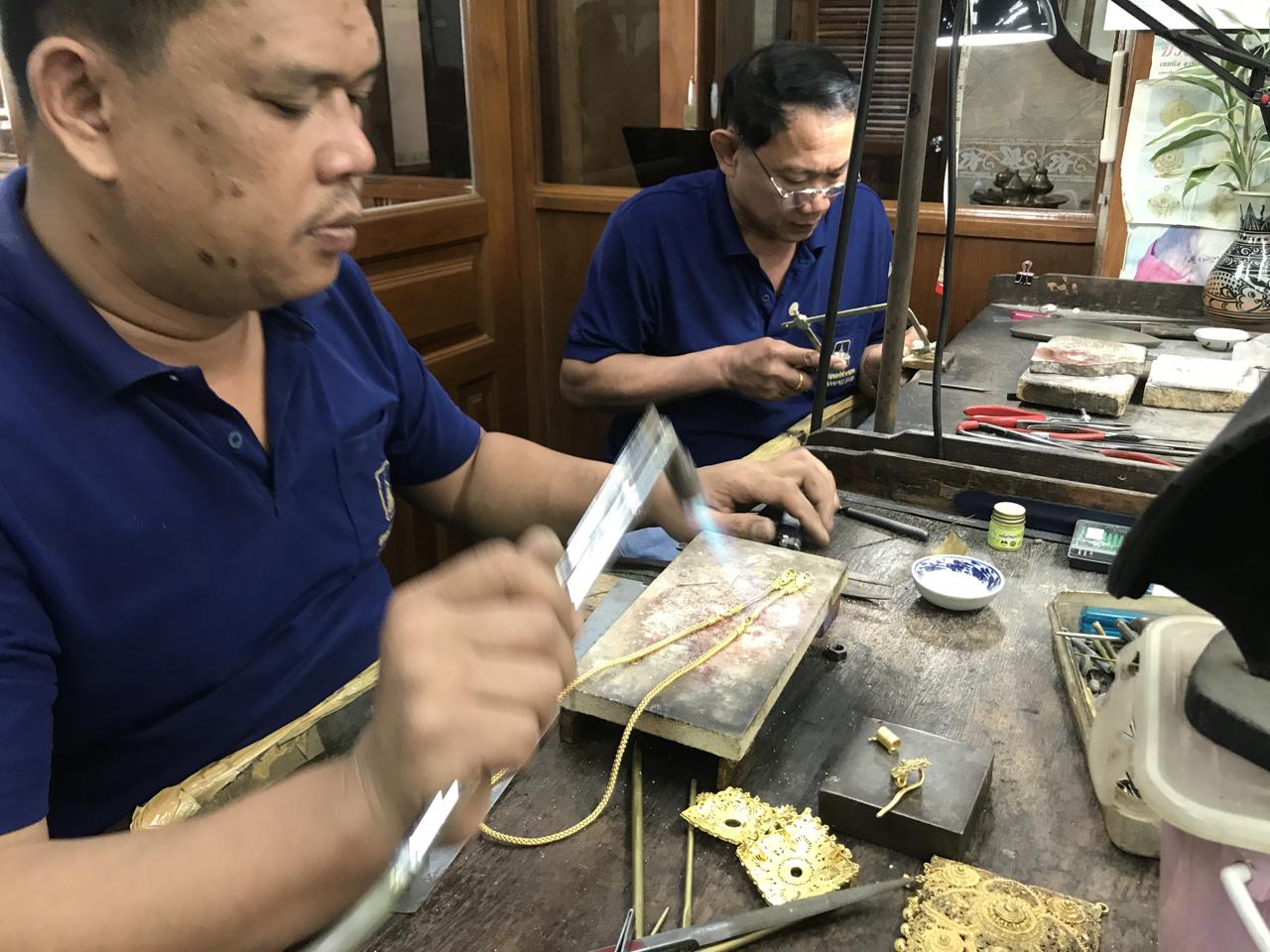 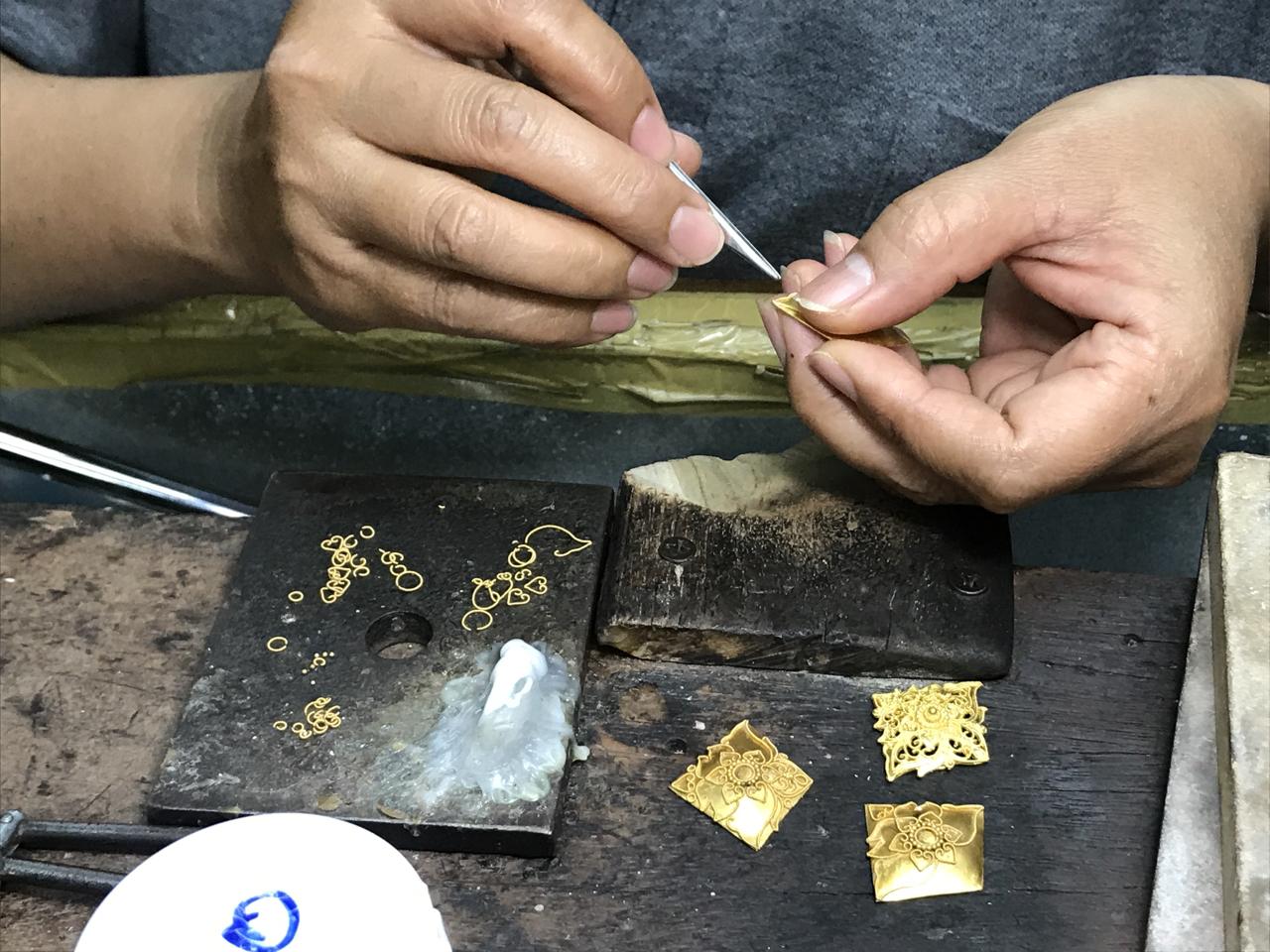 Onanong Pipittong has run a goldsmith shop named Onanong Chang Thong for more than 30 years. She was a goldsmith when she was young so she treasures the skills of the craftsmen. She offers an opportunity for visitors to see how goldsmiths work. We can have a closer look at every crafting process. We saw one of them creating a pattern of an earring by using gold wires that are glued on a gold sheet before using a piercing saw to create the pattern. Another one fills in the colours of a bracelet. On the last row, a goldsmith creates a dok phikul pattern (a flower with six petals) with tiny gold balls. Each detailed pattern needs skilful craftsmen. It's the reason why Sukhothai gold ornaments are more attractive and more expensive than typical gold ornaments. 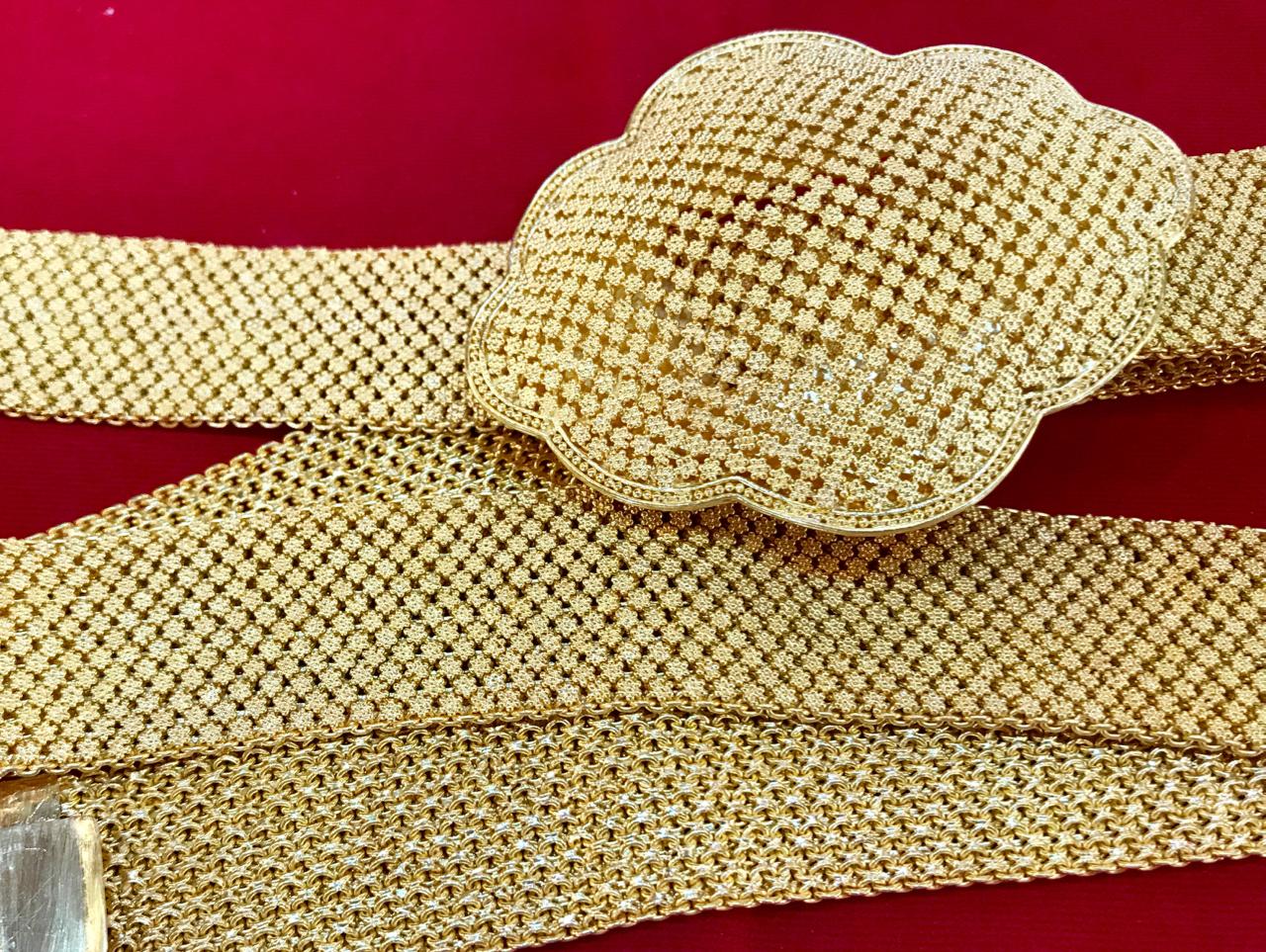 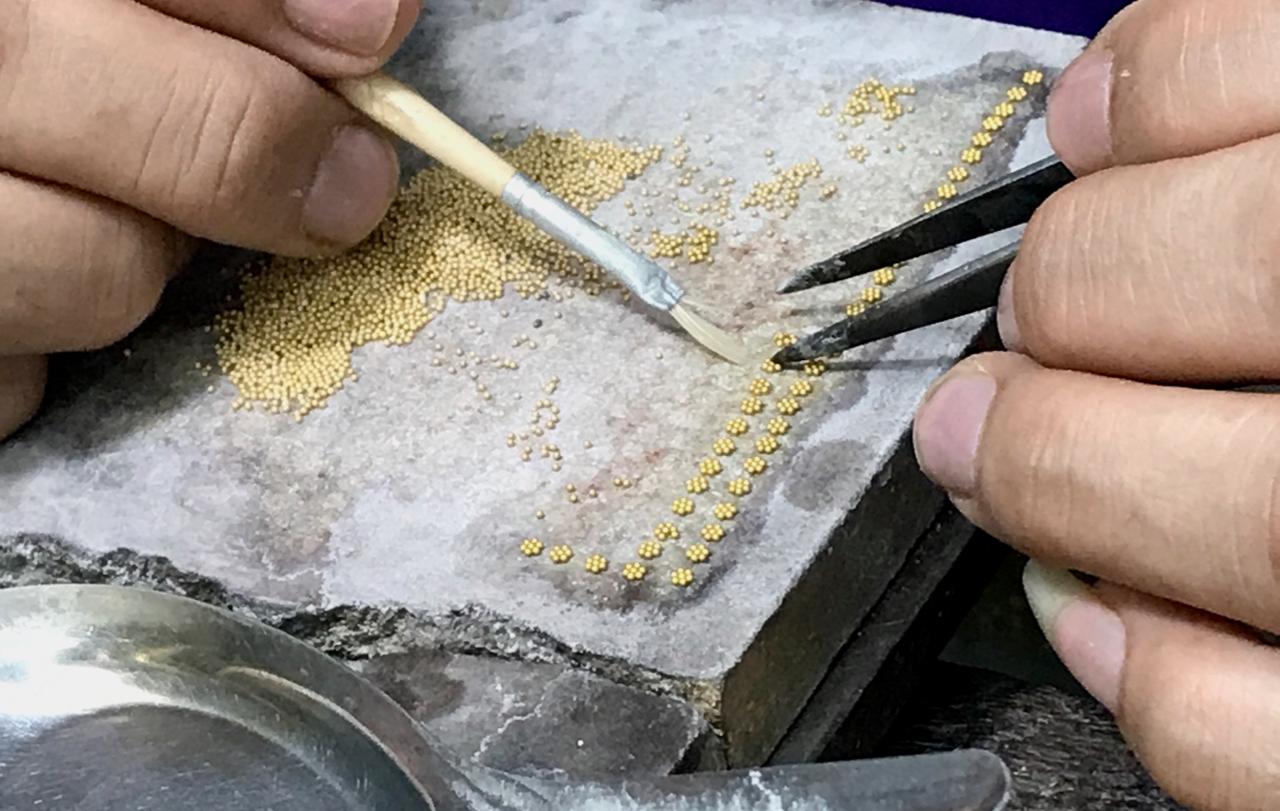 This gold belt shows the delicate work of Sukhothai craft. It has the flowery pattern of dok phikul. The belt is about 95cm long. The total gold weight is 49.23 baht (about 746g). The price is 1.35 million baht. 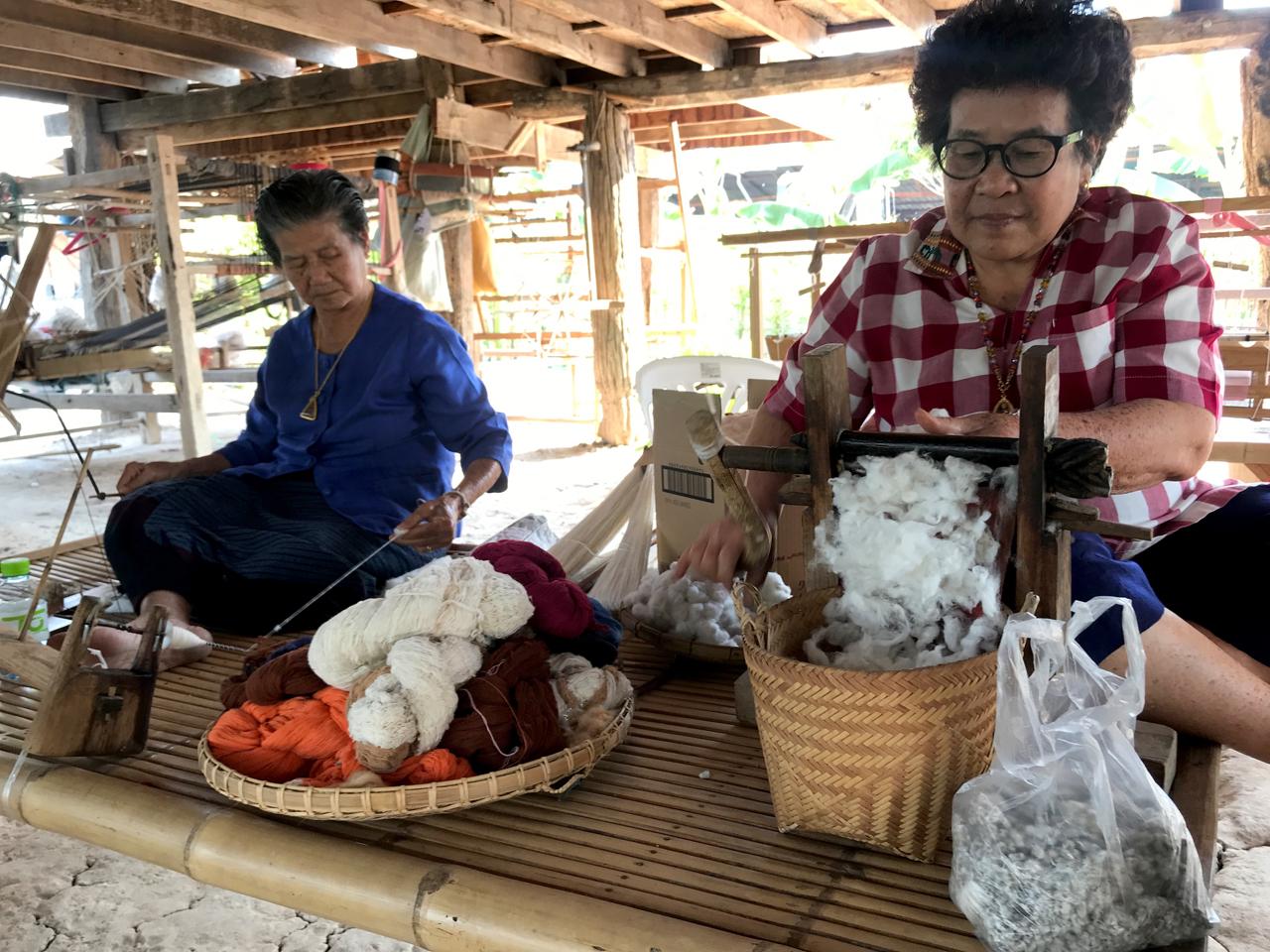 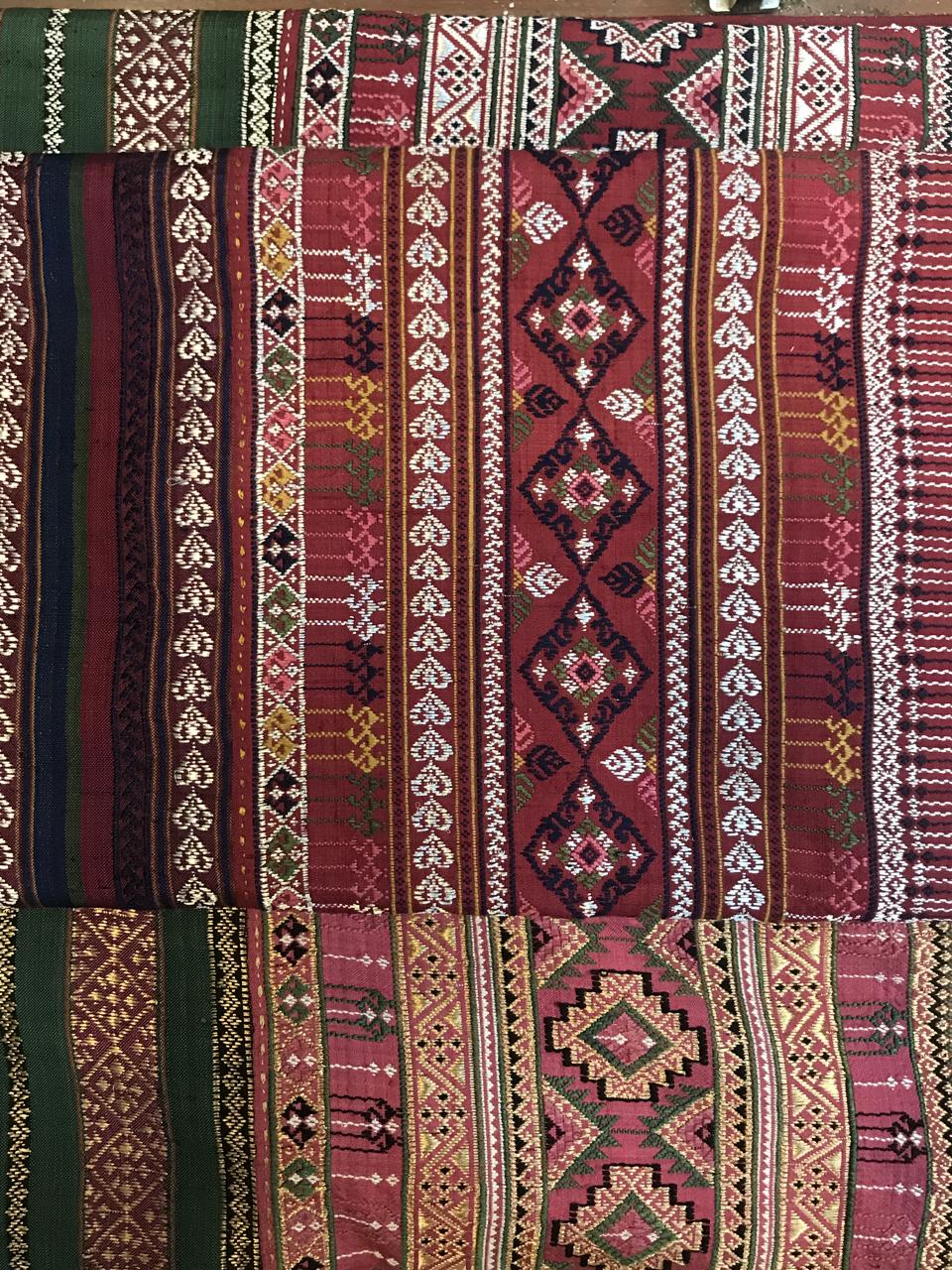 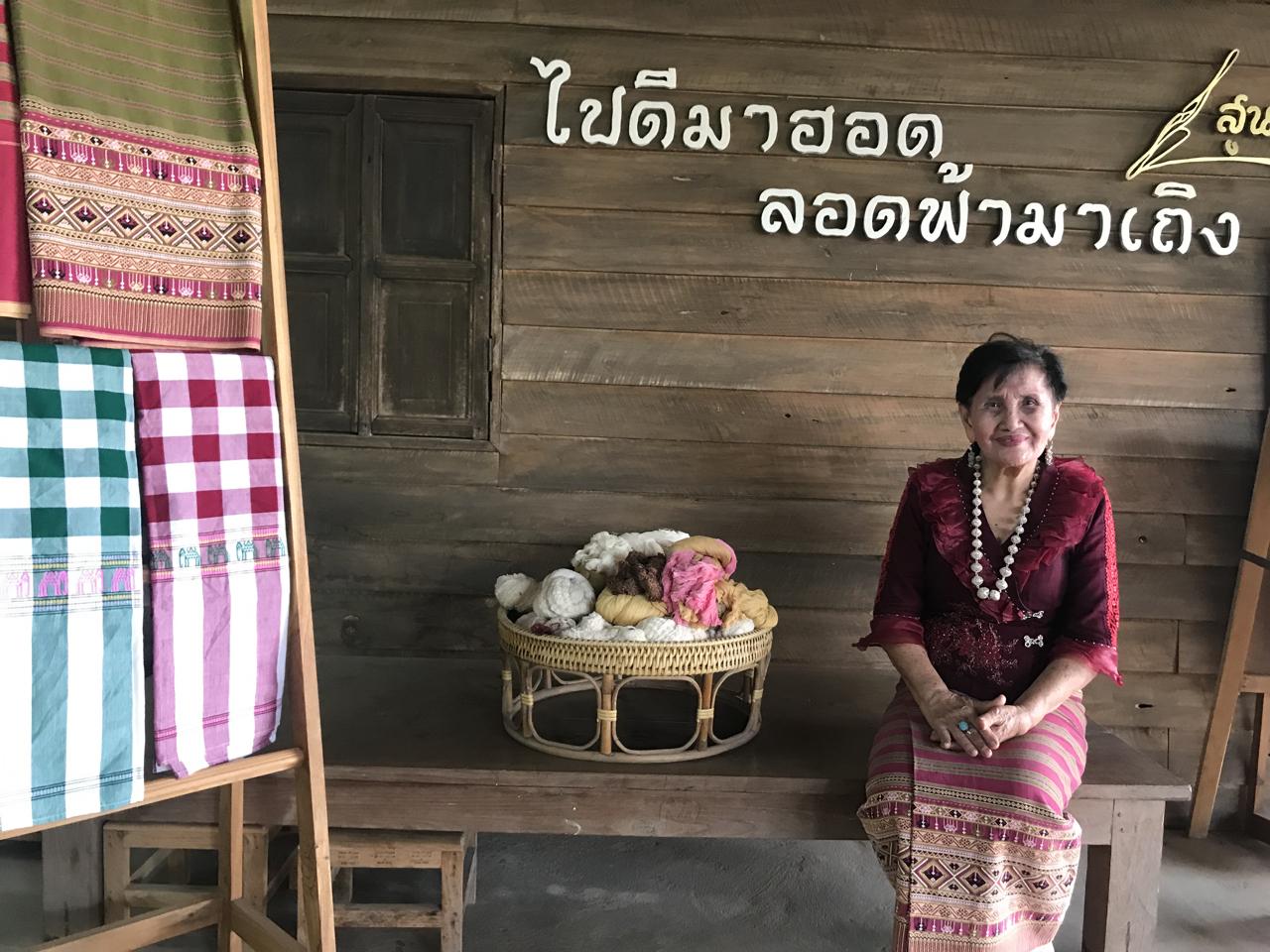 Suntree Vichitnak opened a woven textile shop in 1994. She is a Tai Phuan, an ethnic group. Every Tai Phuan woman needs to know how to weave cloth from a young age. Suntree also passed on the skill to her children. When she was a chairwoman of Ban Hat Sieo Weaver Club, she opened her house as a learning centre for Tai Phuan woven cloth. Her shop offers products from 40 family members. Those items include pha sin, which is a long fabric wrapped around the waist like a skirt, and scarves, bags, shirts, blouses and dresses. She passed on the business to her daughter Raveewan Khanadnid who helps design fashion clothes to attract young customers. Raveewan also created a workshop under the raised floor of her Tai Phuan model house where visitors can learn how to weave handicrafts by using a mini loom or to make a keychain or dangle earrings with wool thread. 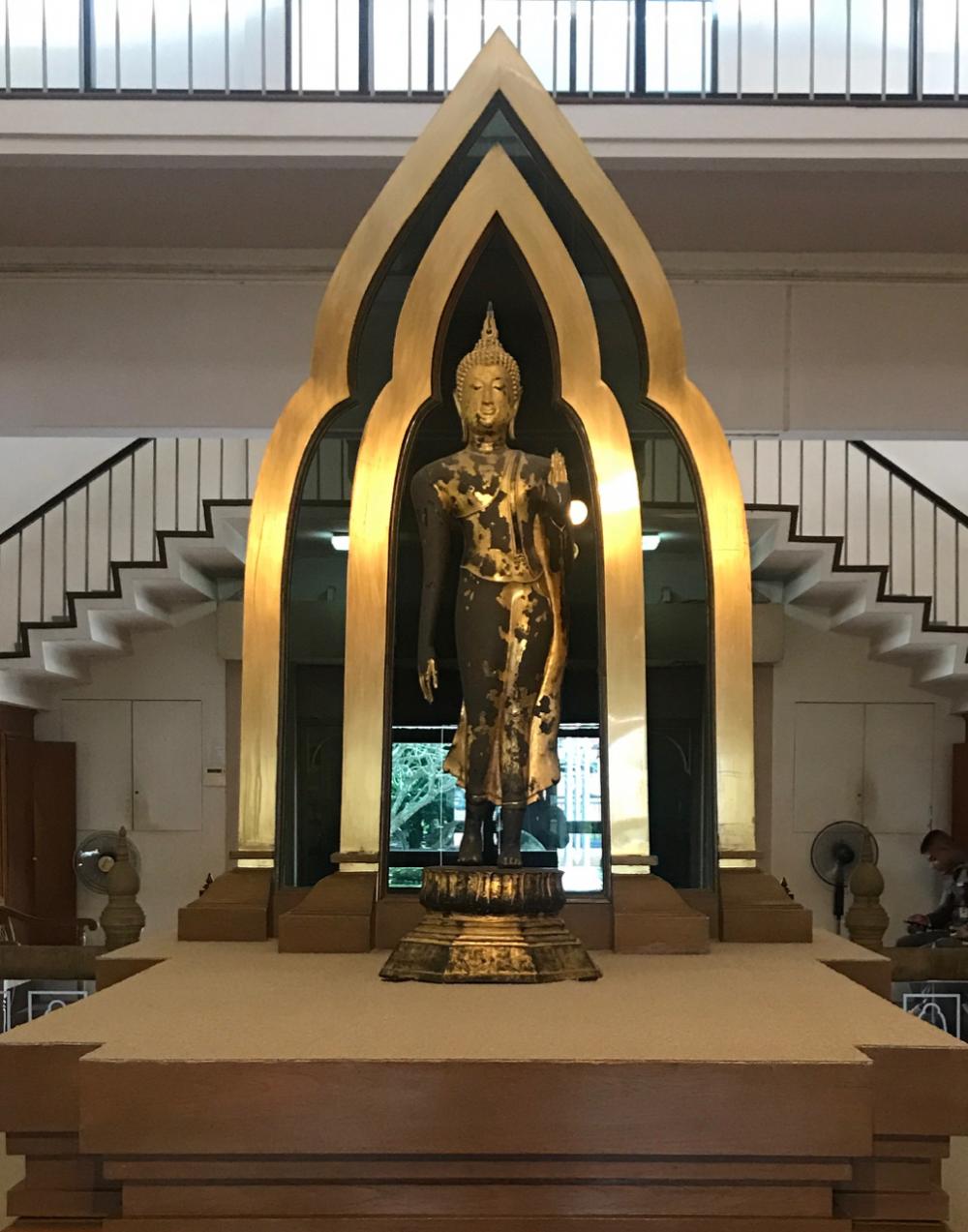 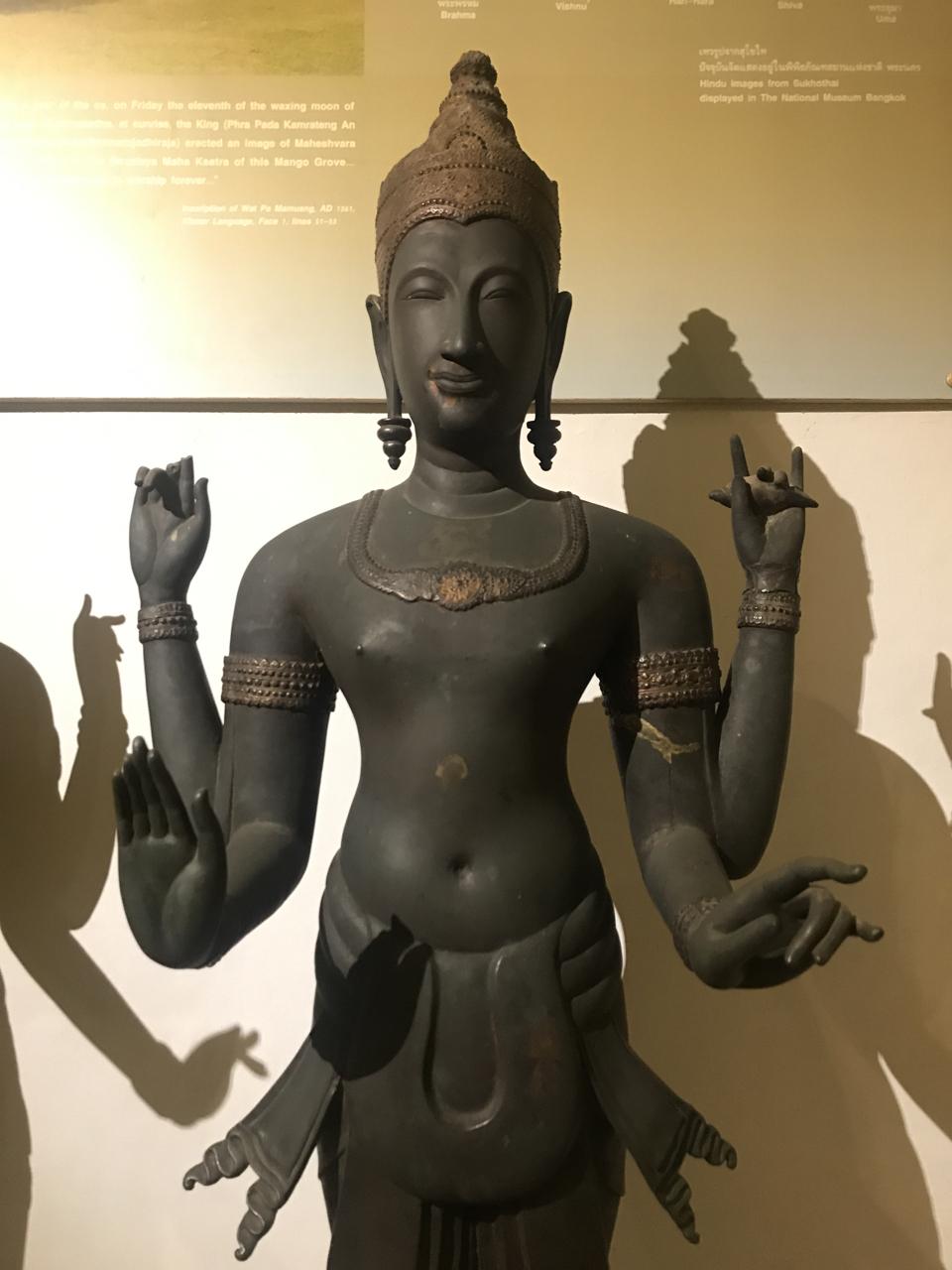 The Ramkhamhaeng National Museum is among the top places to visit in Sukhothai. Located not far from Sukhothai Historical Park, the museum exhibits a large number of ancient artefacts found in Sukhothai old town and its vicinity. The walking Buddha sculpture is one of the highlights of the museum. The image has an oval face, arched eyebrows, mouth with a little smile, long arms and a slim waist. The sculpture is regarded as the best walking Buddha image in the Kingdom. 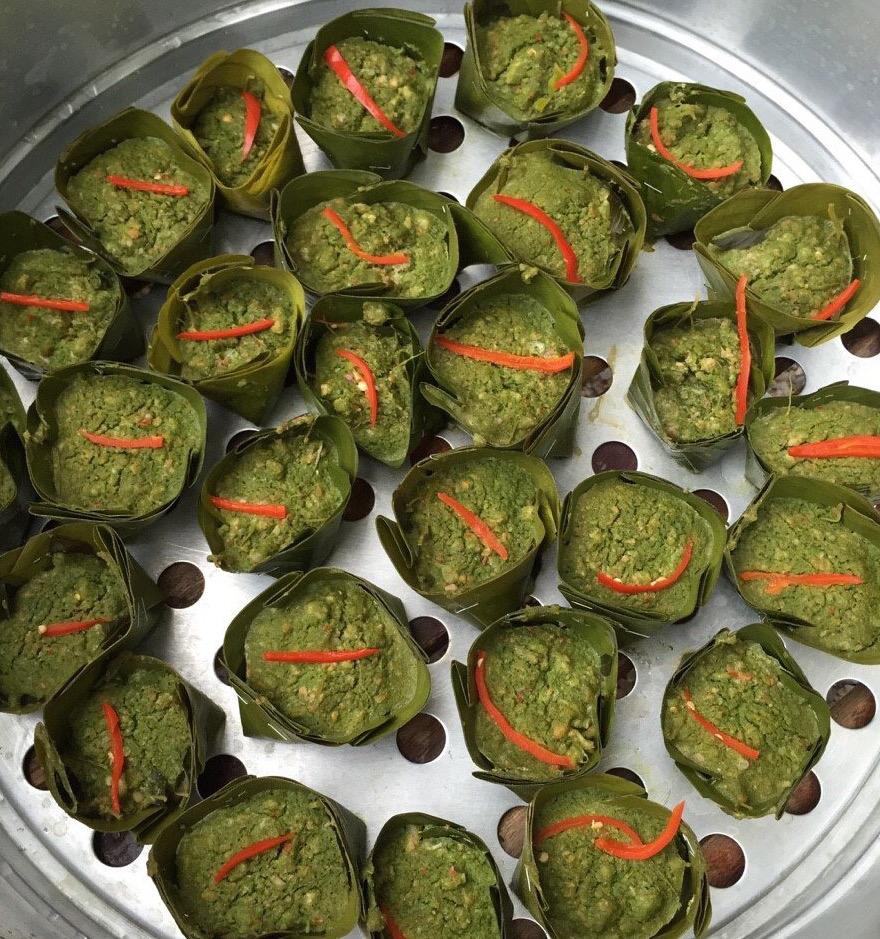 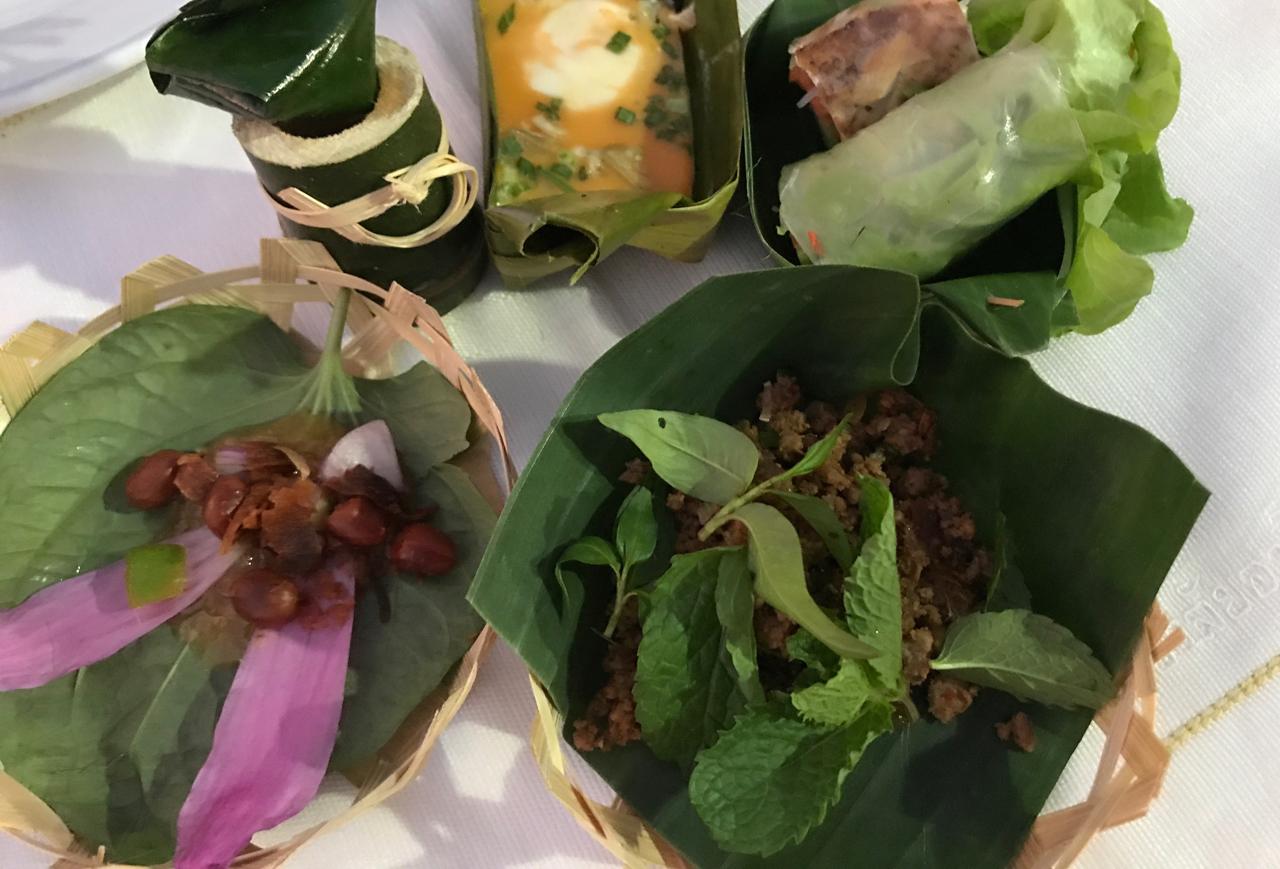 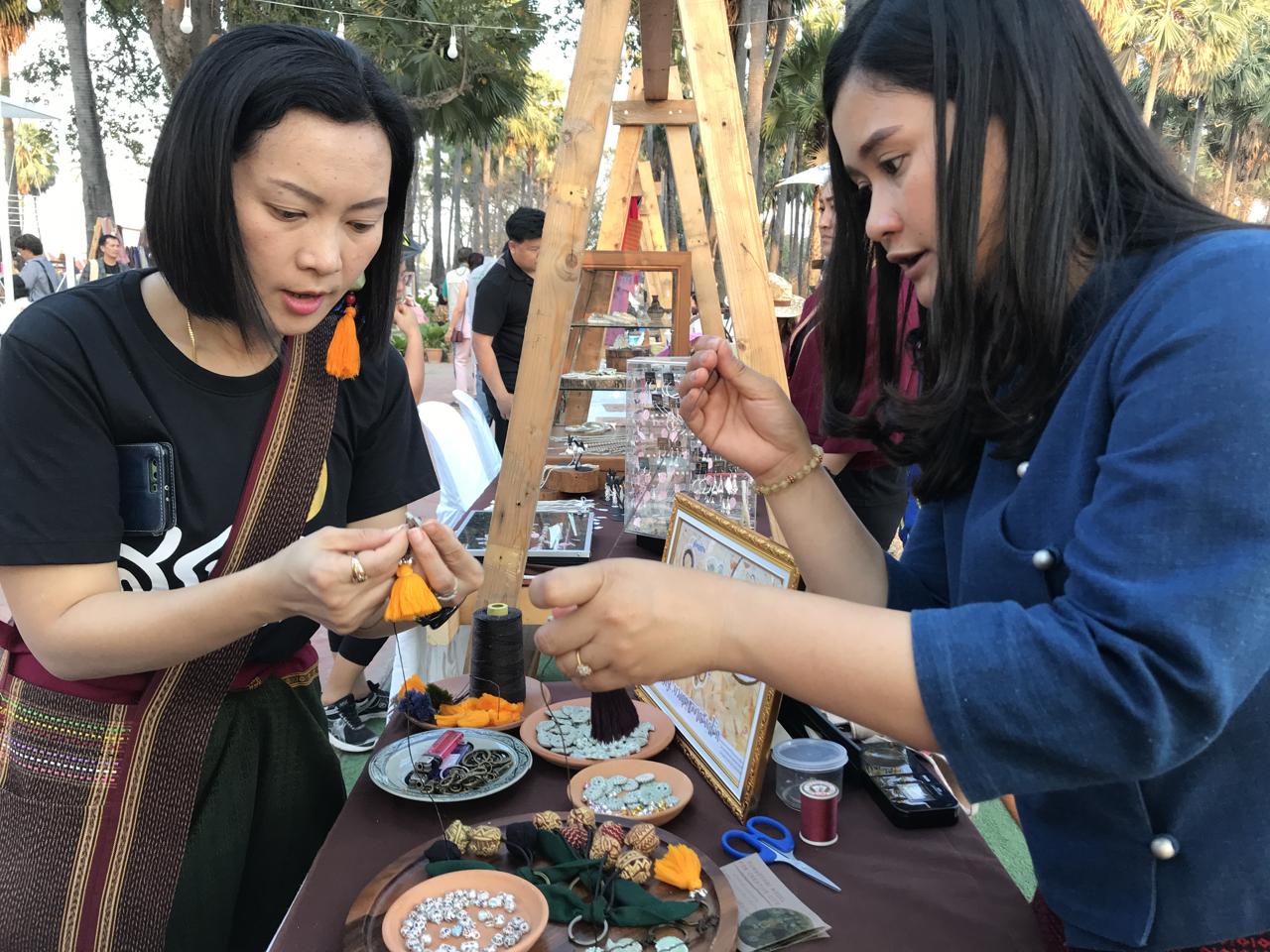 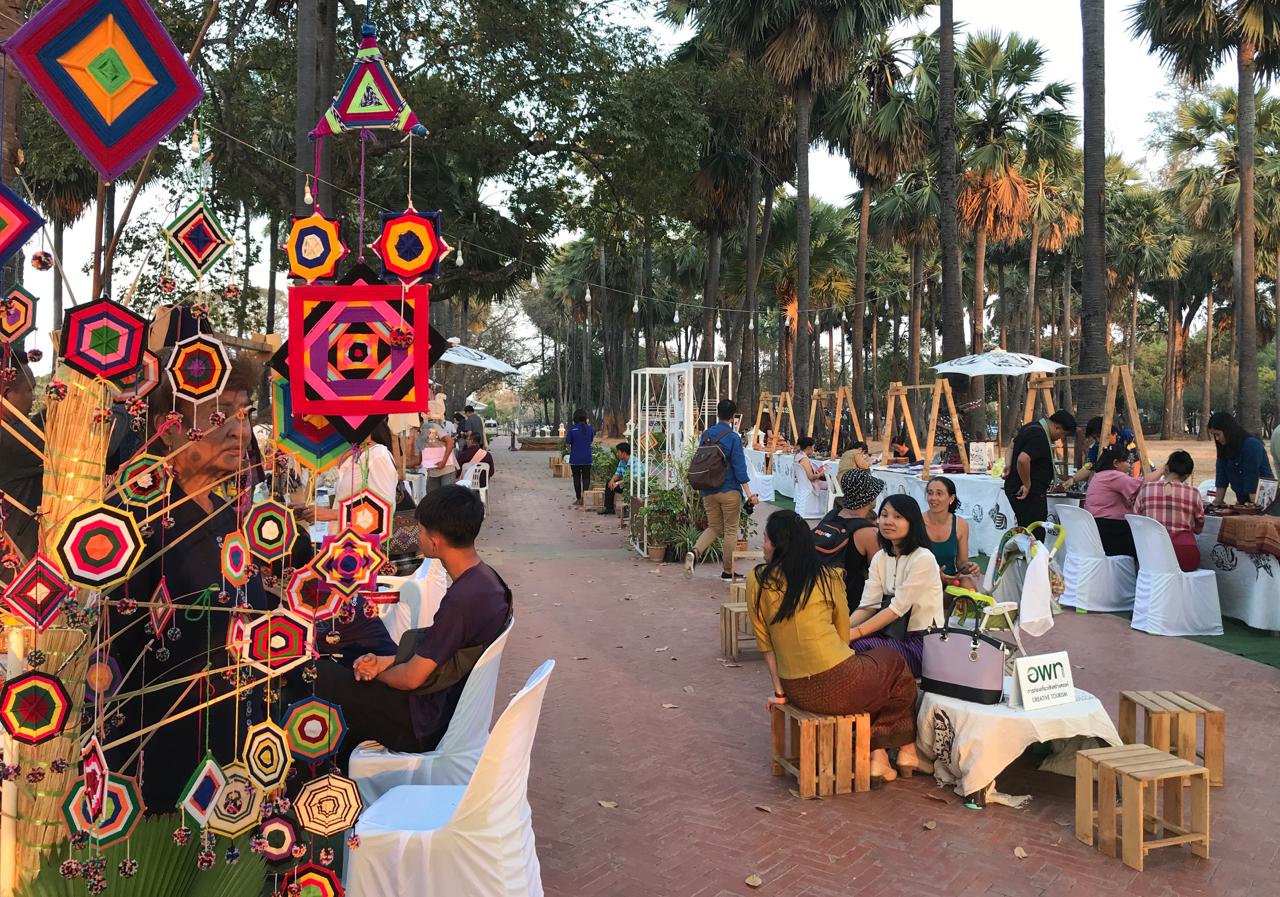 During the ceremony to celebrate Sukhothai as a Creative City of Craft & Folk Arts, some local dishes were served. Among them were duckweed (Wolffia globosa) soup which is known as khai nam or khai phum, it literally means water eggs because it looks like tiny green eggs. The duckweed soup is cooked with minced pork and has a little taste of salt. The dark green look of the soup may deter many from tasting it, but it is delicious. Other mouth-watering dishes are lap pla (spicy fish) and kai pam (grilled scramble eggs) which were served with organic rice. (Photo courtesy of Designated Areas for Sustainable Tourism Administration) 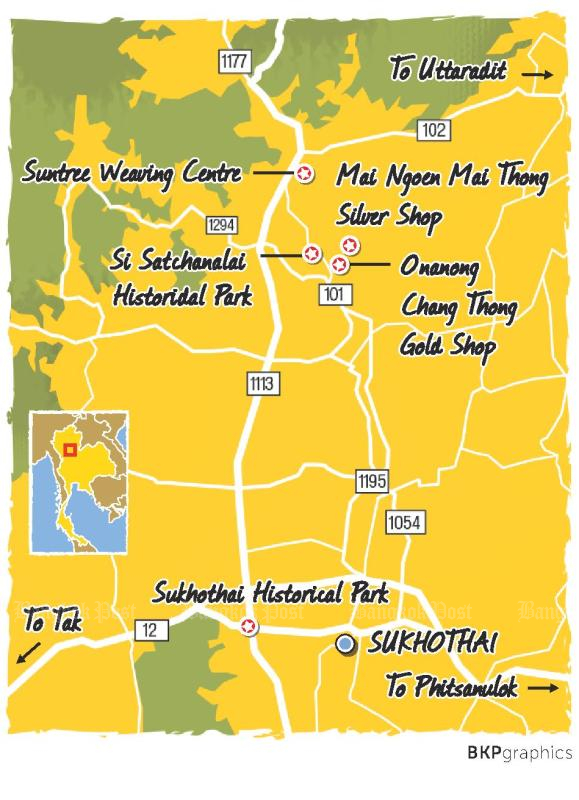 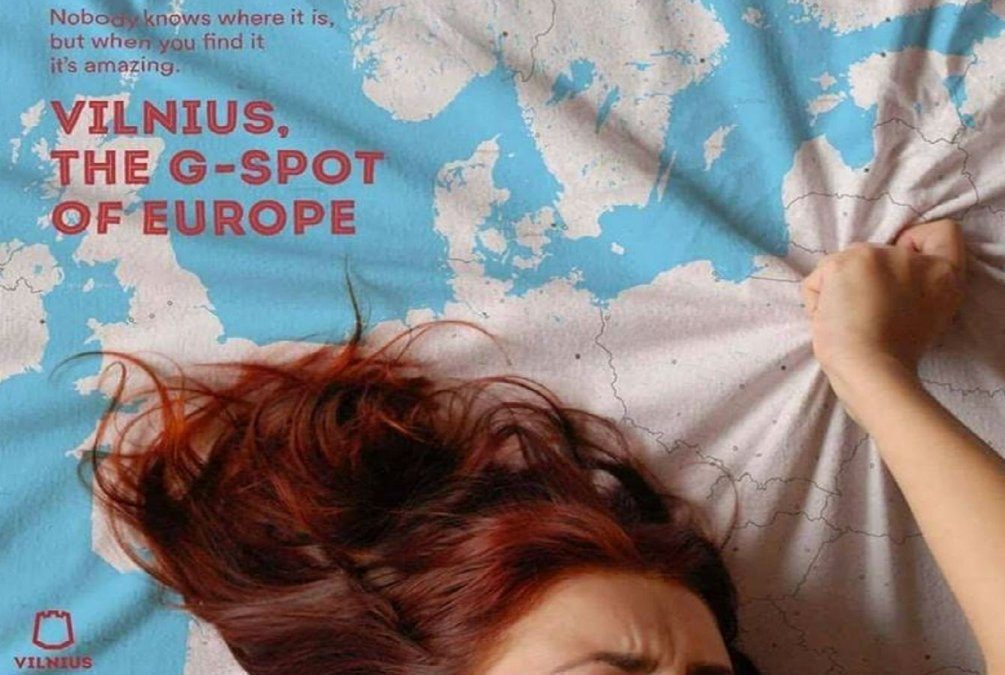 Lithuania’s raunchy tourism campaign: does it hit the spot or come on too strong?

Posted by Travelelog - August 22, 2018 0
It started as a class project of Lithuanian advertising students, who sought to draw international attention to Vilnius and its… 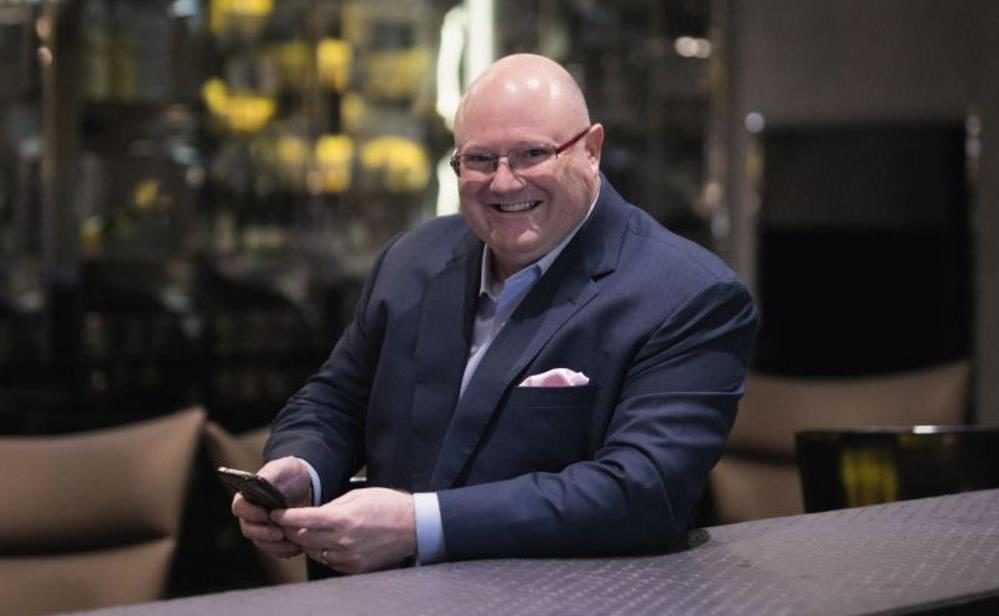 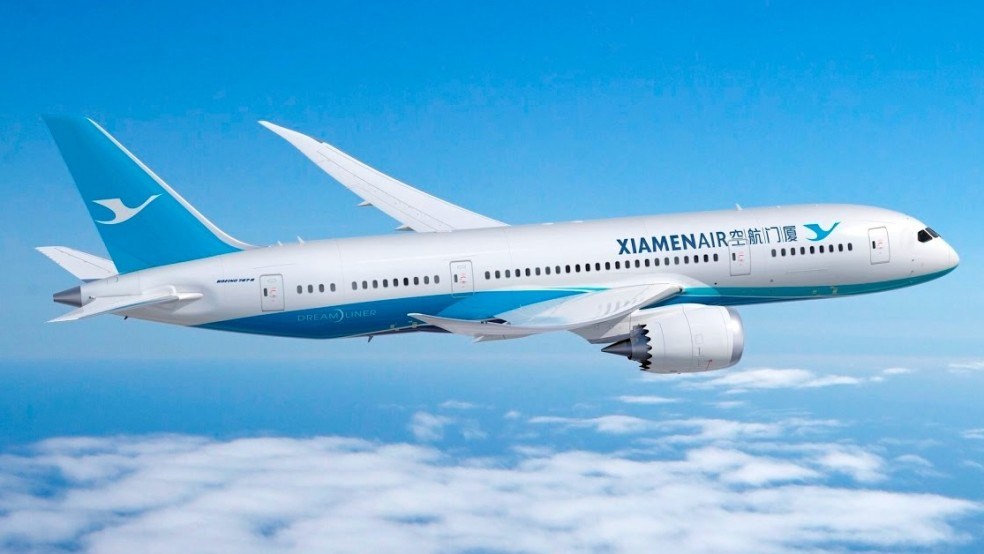 Xiamen Airlines: Ingenico understands the “unique requirements and opportunities” of a growing airline 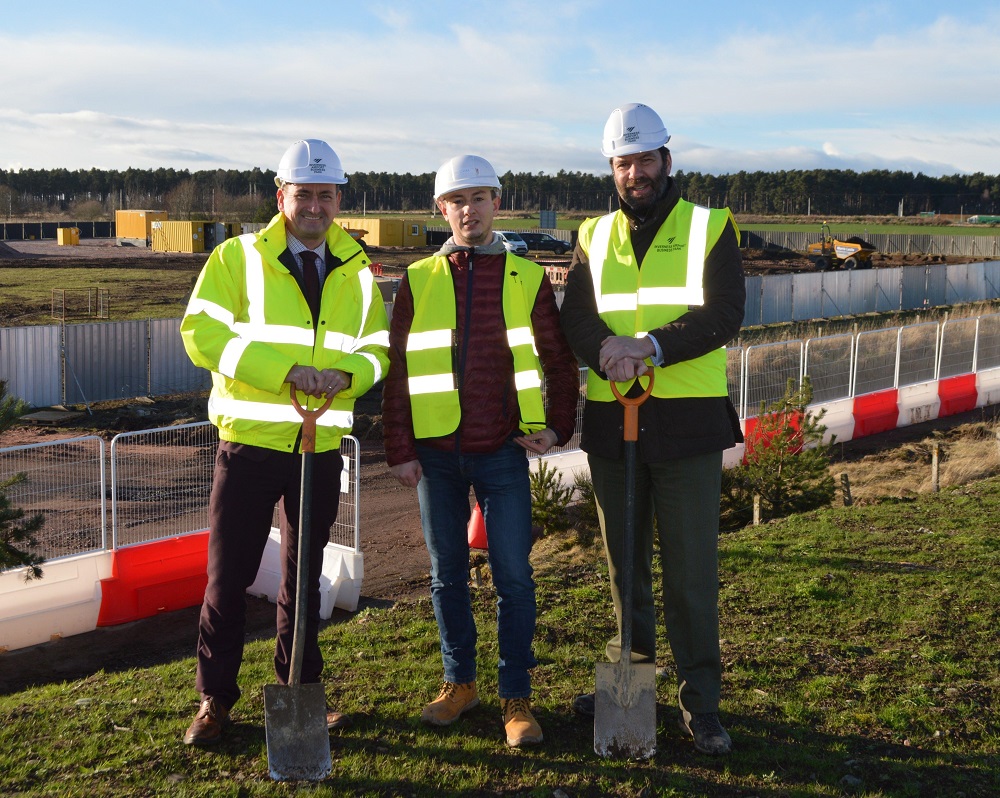