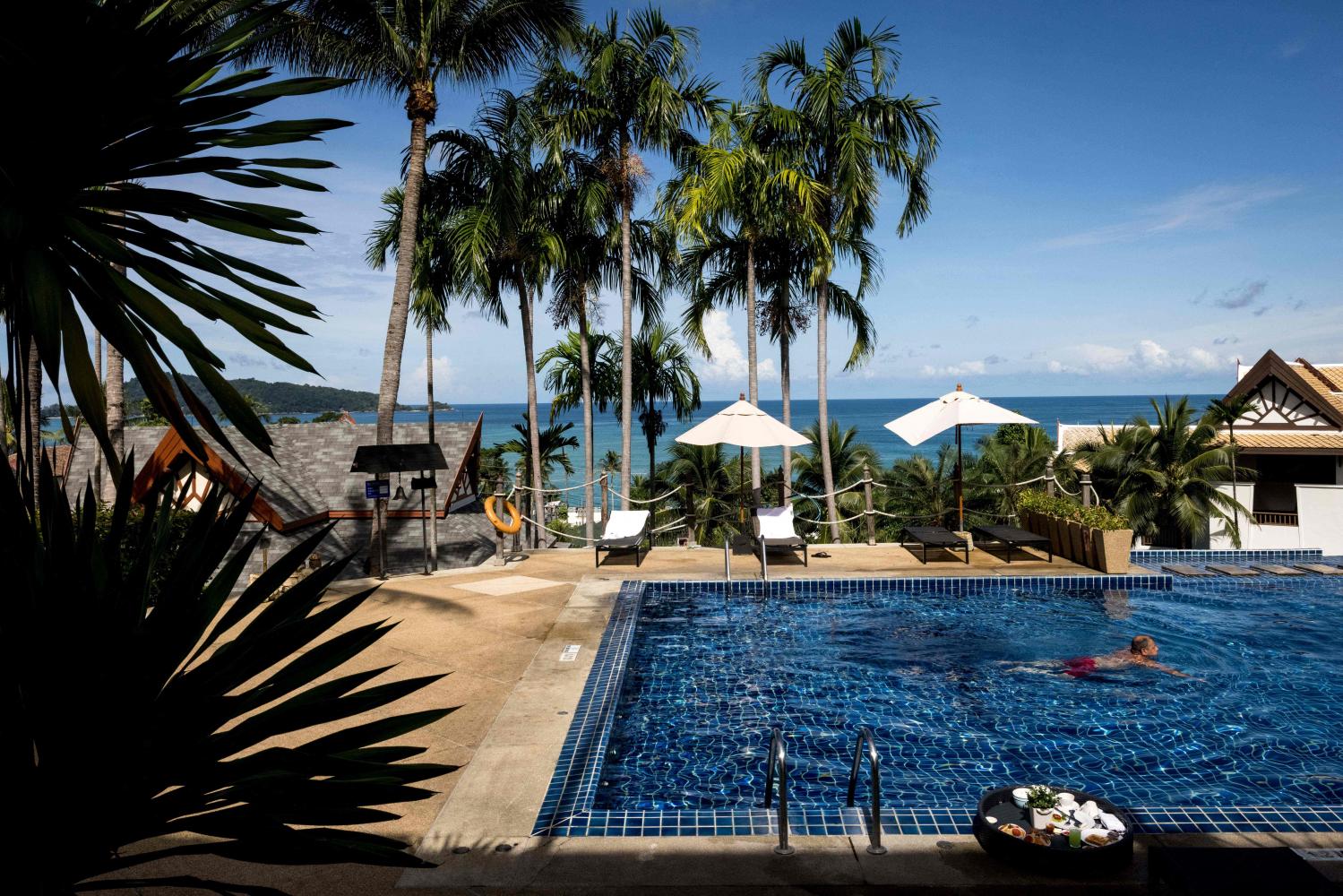 A photo taken on Aug 14 shows a man swimming in a hotel pool in Phuket as tourists use the Phuket sandbox for those fully vaccinated against Covid-19. AFP

The hospitality business in Bangkok is nowhere near a full recovery as the industry remains challenged by government restrictions.

Jesper Palmqvist, area director for Asia-Pacific for STR, a market data firm, said if a domestic sandbox becomes available, people from Bangkok can travel to nearby destinations such as Hua Hin, which previously saw 75-80% occupancy during weekends before it was designated a dark red zone.

The forward bookings in Bangkok for the next 90 days have seen short lead time and lower occupancy.

He said people will choose whatever hotels are open. They will go straight to pool villas or where they can dine out.

Hotel occupancy at the end of the year seems to be in good shape, but the situation could change abruptly as existing bookings for December to January were made available for full cancellation.

He said Bangkok hotels will see 50% occupancy for the whole of next year and it will take longer for a recovery.

The Phuket sandbox which allows more demand to the country has to serve as a model for other destinations, such as Hua Hin Recharge.

Prior to the sandbox, hotels in Phuket had only 2-3% occupancy before jumping to 20% at its peak during the early reopening.

Some 65% of all hotels remained active before the sandbox started. The number slightly improved to 69% during the programme.

Bangkok boasts 200,000 rooms, while another 21,192 rooms from 93 new hotels will be gradually added from 2020-25, said Nikhom Jensiriratanakorn, director for Thailand at Horwath HTL.

Hotels in Bangkok that were rebranded made up 20% of the total from 2017-19 and more will follow suit from 2023 as they want to increase competitiveness when borders are opened.

Speaking at the virtual forum ‘Bangkok — Get Up, Stand Up’, Mr Nikhom said newly built hotels from 2023-25 will add 9% to room supply which is not a large number in the normal situation.

However, as businesses that support the hotel industry, such as airlines and tour operators, still need more time to recover, this will impact hotels.

“By 2025, demand could get back to the 2019 level without enough time to absorb supply, so market occupancy will be diluted,” Mr Nikhom said.

He said around 14,000 rooms are in the pipeline from 2026 onwards, adding more pressure to the recovery path.

AWC will open two new hotels this year in Phuket and Chiang Mai. There is no major change in long-term developments because the company is still optimistic about Thailand.

Chakkrit Chakrabandhu Na Ayudhya, executive vice-president of JLL Hotels and Hospitality Group, said buying momentum is back with more active transaction volume of around 10-12 billion baht this year, compared to 1.9 billion in 2020.

A 2.7-billion-baht transaction for six properties was completed, with another 3 billion baht for three properties in the pipeline. Three hotels already signed a memorandum of understanding.

However, most deals were for small hotels as there were only 6% with a value exceeding 1 billion baht. It will take until next year to see the transaction of 2–3-billion-baht properties.

Mr Chakkrit said the purchasing trend in Bangkok this year saw more enquiries from high-net-worth individuals and corporates, but less interest from developers and operators.

Those who still want to buy consist of local investors and foreign investors from Singapore, Japan, Hong Kong, Malaysia and China. The US and the Middle East are more interested in the capital.

However, foreign hotel owners in Bangkok account for just 7% at the moment. 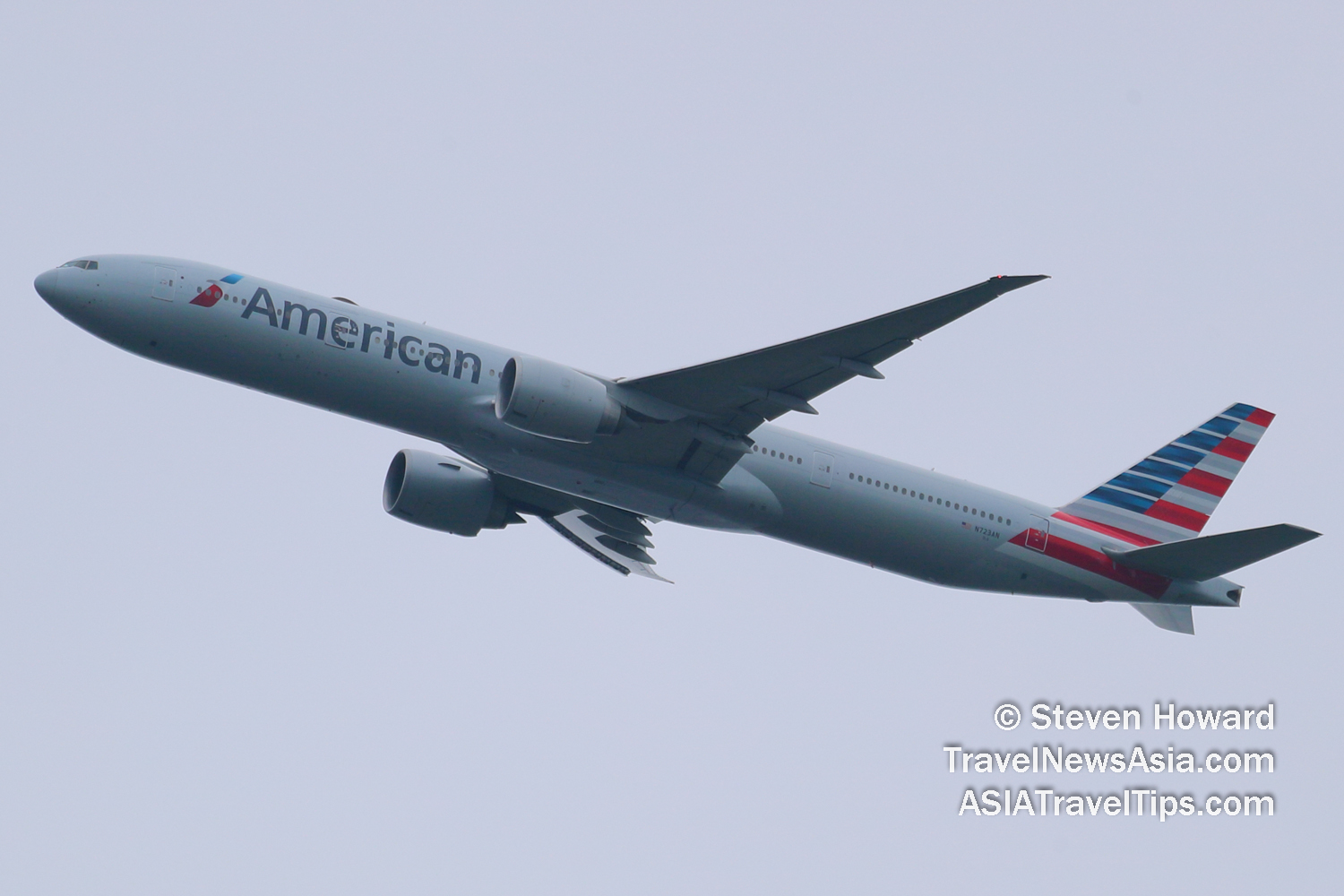 Posted by - February 27, 2021 0
(24 Feb 2021) American Airlines has renewed its content distribution agreement with Amadeus. Included in the agreement is NDC-enabled content… 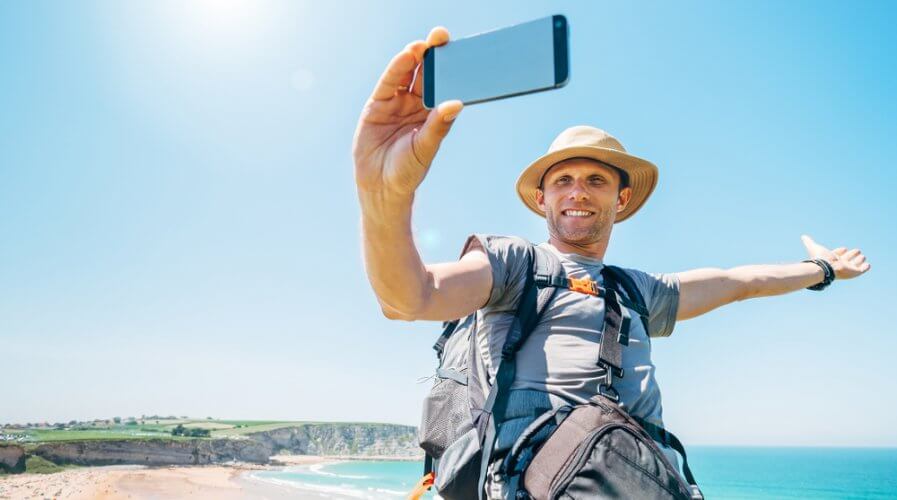 Lonely on a solo travel? Here’s how to beat it

Posted by Travelelog - February 21, 2019 0
Your guide to surviving solo travel. Source: Shutterstock. SO you are planning your first ever solo trip. The necessities are… 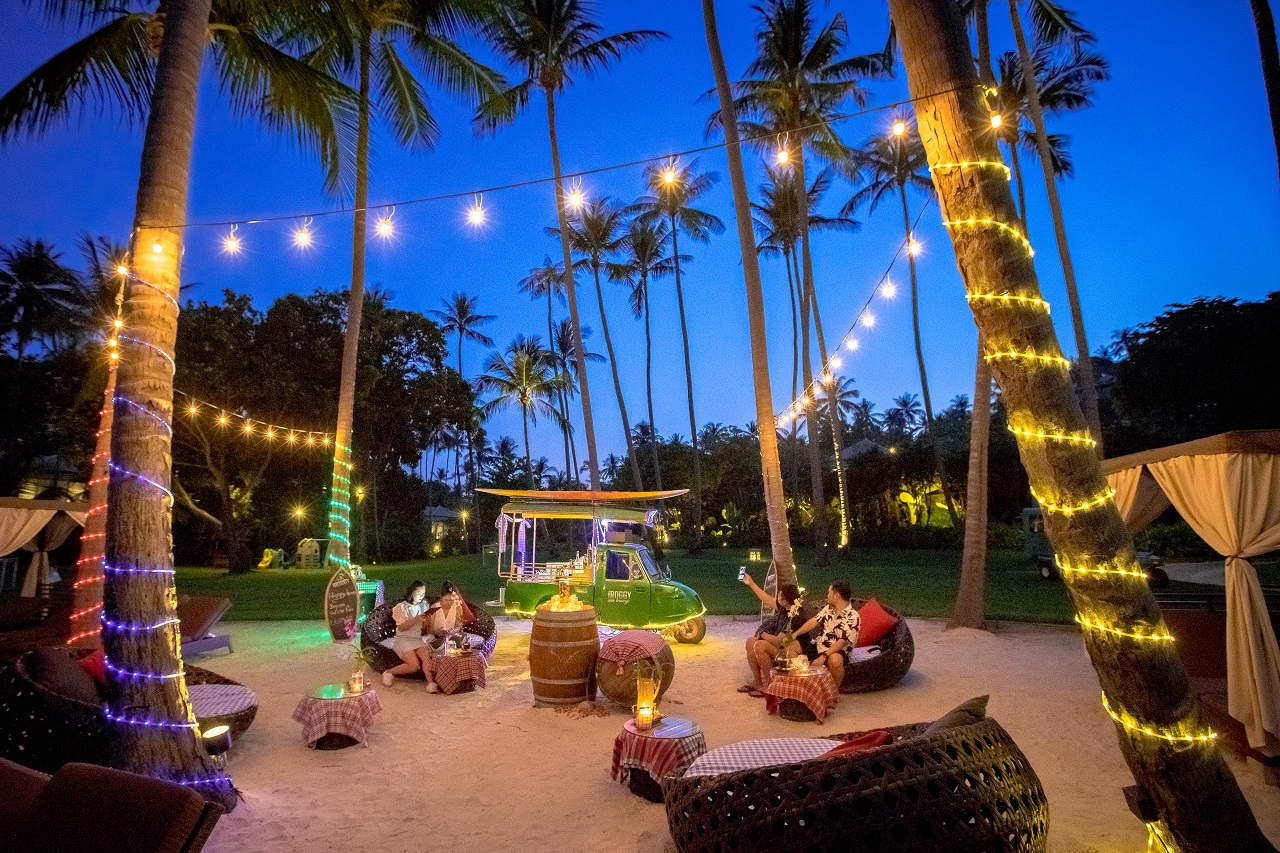 9 Best Bars in the Far East for Father’s Day

Posted by Travelelog - June 4, 2019 0
This Father’s Day, why not steer Dad to something he’d really like – a good old-fashioned lip-tingling drink? If you happen to be… 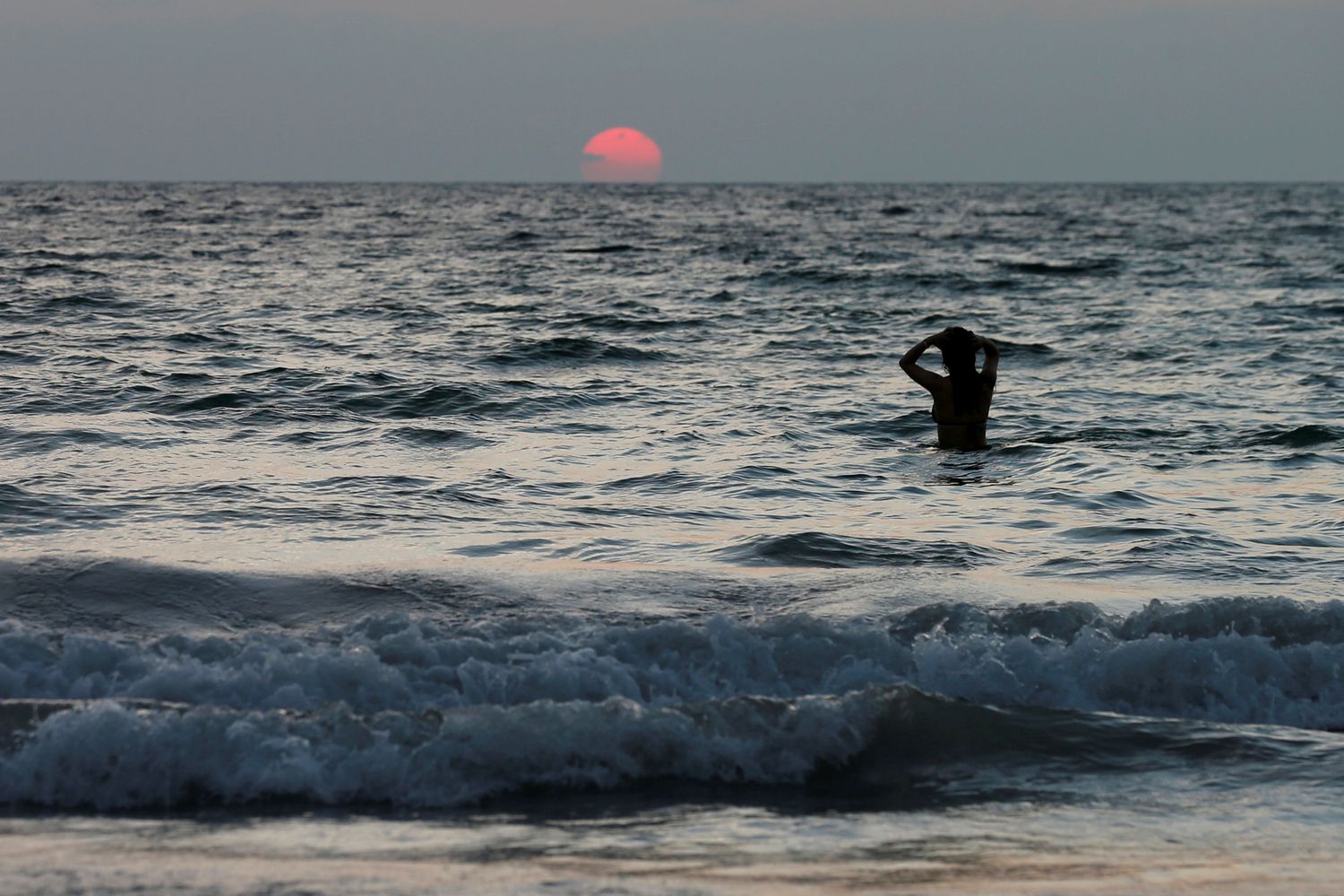 Posted by Travelelog - May 8, 2018 0
Celebrity Edge, created with architects and designers including Kelly Hoppen MBE, Tom Wright and Patricia Urquiola, launches in December 2018…